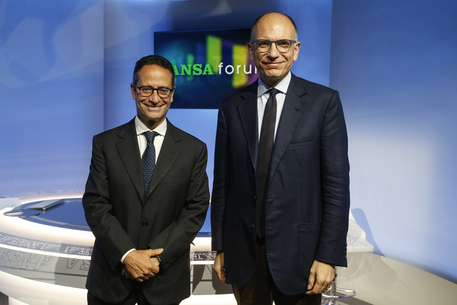 (ANSA) - ROME, JUN 23 - A homophobia bill the Vatican says may breach its concordat with Italy does not curb freedom of expression, centre-left Democratic Party (PD) leader Enrico Letta told an ANSA Forum Wednesday.
In an informal communique to the Italian embassy to Holy See, the Vatican said Tuesday the so-called Zan bill could breach the 1929 Lateran Treaty that regulates relations between the Italian State and the Catholic Church if it becomes law.
The rightwing League party has been especially active in trying to block the Zan bill, describing it as "divisive and ideological" and arguing it could hamper freedom of expression.
Letta reiterated to ANSA that "it is a measure that does not restrict the freedom of expression but has the aim of intervening against hate crimes.
"We are strongly convinced of the need for the measure, not to plant a flag but because we believe that the daily lives of so many, too many Italians without this norm is a worse life.
"It is a norm of civilisation".
Letta said what the Draghi government - which he hoped would stay in office until 2023 - says on the row would be "very important".
"We will watch what the government tells us because it is the holder of the relations with the Holy See, it is not a question inherent in Italian debate but (concerns) juridical relations between two States, regulated by the Concordat.
"My impressions, having read (the Vatican's) observations is that the bill does not affect the kind of concern on school autonomy and the freedom of expression, it is an intervention against hate crimes but does not limit the freedom of expression".
One of the Vatican's strictures about the bill is that it sets up an anti-homophobia and anti-transphobia day which would have to be celebrated in Italy's Catholic private schools too.
Earlier Wednesday Lower House Speaker Roberto Fico said that the Italian parliament would not stand for any meddling on the bill against homophobia after the Vatican raised its concerns about it.
"Parliament is sovereign," Fico told RAI television. "The parliamentarians decide how they want to vote in independent way.
"The Zan bill has been approved by the House and is now in the Senate.
"We, as the parliament, do no accept interference. "Parliament is sovereign and will remain so forever".
The Zan bill features measures to prevent and combat discrimination and violence based on motives linked to a person's sex, sexual orientation or gender identity.
It would make such acts an aggravating factor in felonies, like racism already is.
The Holy See's communique reportedly said the bill could affect the religious freedom that the Lateran Treaty guarantees the Catholic church.
Several of Italy's centre-right parties oppose the Zan bill and an alternative homophobia bill has been presented by Silvio Berlusconi's Forza Italia (FI) and Matteo Salvini's League.
The League has strongly and repeatedly argued the bill could hamper freedom of expression.
The Zan bill's backers say this is not true, arguing the text has safeguards to ensure that, for example, Catholic politicians can still publicly say they think homosexuality is sinful.
(ANSA).