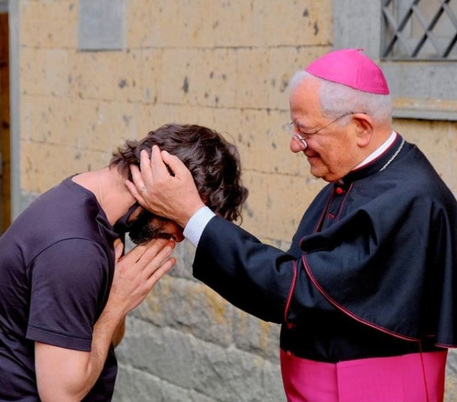 (ANSA) - PERUGIA, APR 13 - An Italian priest has decided to hang up his cassock after falling in love with a local woman near Perugia.
Don Riccardo Ceccobelli confessed to his parishioners at Massa Martana at the end of Sunday Mass that he had decided to start procedures for returning to the lay state "because my heart is in love".
His parishioners said they supported his move, announced together with the bishop of Orvieto-Todi, Msgr Gualtiero Sigismondi, although they had had no inkling about it.
"We were all stunned," said local AVIS blood donation group chief Marcello Granocchia, one of the most assiduous Mass attendees in the small town of under 4,000 people.
"We weren't expecting it, but you cannot command your heart, as the saying goes, and Don Riccardo showed he was brave and frank.
"His choice must certainly have been a hard one".
The owner of the central bar in Massa Martana said her clients had not complained about the priest's decision, because "despite the clamour and the amazement, people here know what an intelligent person Don Riccardo is".
She said "he is someone who strikes you to the heart, and he must have weighed this decision deeply and with great awareness".
Luciano Perni, head of the local elderly social centre, said "we're not interested in gossip and suppositions, and we don't think we can afford to judge. We are used to seeing priests in a different way, but things have changed and Don Riccardo is a modern priest.
"Even priests have feelings and he was honest enough to tell it how it is. There's nothing wrong with it".
But some parishioners said they would be sad to see Don Riccardo go, especially because of his pastoral skills and the way he has involved young people in the Church's activities.
Giovanni Barlozzari, local Red Cross head, who shared many initiatives with the priest over the years, said: "I'm sorry that he's leaving us, it will be a great loss to the community.
"He is an exuberant man, always ready to roll up his sleeves and jump into things with enthusiasm. His choice was unexpected, but it must be respected. For me and for many others he remains a friend that we will continue to esteem".
The identity of the woman who has claimed Don Riccardo's heart is as yet unknown. (ANSA).