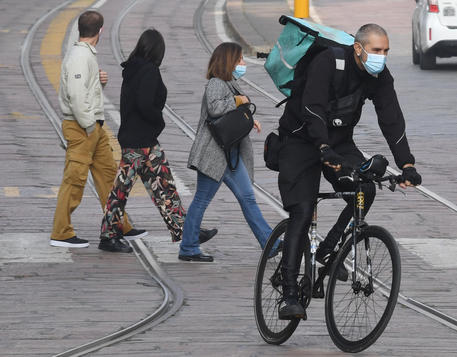 (ANSA) - ROME, FEB 24 - Milan prosecutors said Wednesday that Italy's top food-delivery firms, Uber Eats, Glovo-Foodinho, JustEat and Deliveroo, have been notified that they must hire 60,000 riders on labour contracts for "continuous, coordinated" workers and stop using them as self-employed freelancers.
Milan Chief Prosecutor Francesco Greco told a press conference that food-delivery riders in Italy have "labour conditions that deny them a future".
Greco's department said six officials from these companies had been put under investigation because the situation regarding the riders was "clearly illegal". Greco said the riders should be considered "citizens" not "slaves".
He also stressed the vital role the riders have played in enabling many businesses in the catering sector to survive during the COVID-19 lockdown and subsequent restrictions.
The prosecutors said the food-delivery firms were facing a total of 733 million euros for failing to respect safety regulations.
The press conference was called to announced that Milan prosecutors have launched an investigation into the taxes of the Italian branch of Uber Eats, which was put into administration last year for allegedly running a 'gangmaster' system of worker exploitation.
Earlier this month Uber Eats said that it had a adopted a new protocol to protect the health and safety of its food-delivery riders in Italy.
The new protocol will see the company provide safety equipment such as helmets free to riders and lay on free training courses for them too, among other things.
Uber Eats said it was the "first company in Italy to apply a package of clear procedures and concrete initiatives" of this kind. (ANSA).