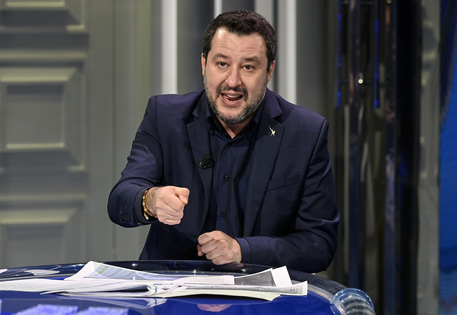 (See relation story on political crisis) (ANSA) - ROME, FEB 12 - League leader Matteo Salvini said Friday that he was ready to put aside differences with his political opponents to make a government led by Premier-designate Mario Draghi a success in a time of national emergency.
"We will remember COVID for decades. It is one of those periods, like a war, that leave a mark," Salvini told Mediaset television.
"You have to forget ideologies and rows. It is the time to work together to reconstruct the country, putting aside likes and dislikes, (whether we are) nationalists or pro-Europe".
The League leader said he was in synch with Draghi "on concrete issue and the real urgent needs of Italy".
On the other hand, Giorgia Meloni, the leader of the Brothers of Italy (FdI) party, said Friday that the right-wing group would assess the cabinet Draghi chooses and the government's programme before deciding what to do in confidence votes in parliament.
Unlike the League and the other member of the centre-right alliance, ex-premier Silvio Berlusconi's Forza Italia (FI) party, FdI has said it will not back Draghi's executive.
It remains to be seen whether FdI abstains in the confidence votes or votes against. (ANSA).