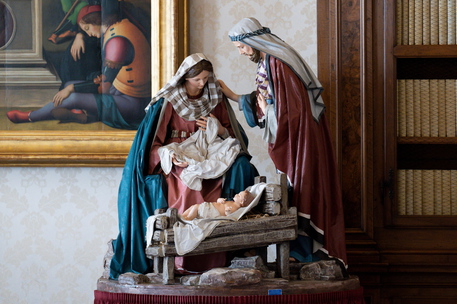 (ANSA) - NEW YORK, DEC 28 - Father Reginald Foster, Latinist to four popes and one of the world's top Latin teachers, died of COVID on Christmas Day in his care home in Milwaukee.
He was 81.
Foster, who wrote, spoke, swore and tweeted in Latin, was nicknamed by the Swiss Guards "the petrol station guy" because of the worker's clothes he wore in defiance of apostolic pomp.
For over 40 years he worked in the Vatican translating encyclicals, bulls and apostolic letters in the language he fell in love with as a teenager.
The son, brother and grandson of plumbers, he stayed loyal to the blue collar roots of his family but spoke Latin with the eloquence of Cicero.
"With him the Holy See has lost one of the most colourful characters of all time," said John Allen, Vaticanist of Crux.
A Descalsite Carmelite, Father Foster arrived in Rome to study Latin and theology in the early 1960s.
From 1970 to 2009 he worked in the Vatican's Latin section, starting by translating a message of congratulations from Paul VI to Ugandan dictator Idi Amin.
He later became the Latin voice for another three popes: John Paul I, John Paul II and Benedict XVI, for whom he managed the Twitter account Pontifex_lt.
"He gave voice with the Latin language to countless documents and, in a similarly assiduous and generous way as maestro and teacher, trained very many pupils," said Pope Francis.
For his students at the Gregorian University he was and remains 'Reginaldus'.
Reggie would often tell his sometimes struggling students: "You don't have to have an excellent mind to know Latin: prostitutes, beggars and pimps spoke it in ancient Rome, so there's hope for all of us".
Foster was fond of scandalising stuffier clerics: in the privacy of his monk's cell, where he slept on the floor with only a light blanket on top, he said Mass "dressed as I was born", as he once told the Minneapolis Star Tribune in an anecdote some said was apocryphal.
Over the years he became an ever more indispensable and faithful interpreter of a language that he insisted was still alive and even adaptable to modern life: like when he found the Latina equivalent for 'microchip', "assula minutula electrica", or reset the Vatican City ATM with the instrcution that his beloved Cicero would have used if he had chanced to pass by: "Inserito scidulum quaeso faciundam ut cognoscas rationem", "insert your card to find out how to proceed".
Reggie trained generations of Latin scholars and teachers, for whom he was a cult figure, and never insisted that they pay for his lessons - the reason why the Gregorian let him go in 2009.
He leaves a book compiled by fans devoted to his unorthodox teaching methods: "Ossa Latinitatis Sola ad Mentem Reginaldi Rationemque": The Mere Bones of Latin According to the Thought and System of Reginald by Reginaldus Thomas Foste. (ANSA).