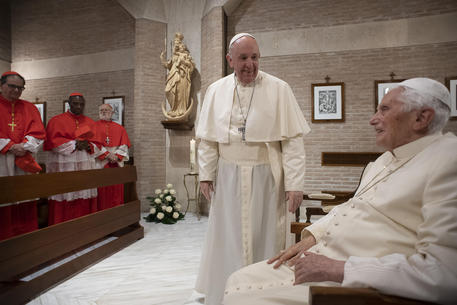 (ANSA) - VATICAN CITY, DEC 2 - Pope Emeritus Benedict XVI is having trouble speaking, one of the new cardinals named at Saturday's consistory told Vatican News Wednesday.
The 93-year-old German former pope, who resigned in 2013 after eight years on the Throne of Peter, "has difficulty in expressing himself," said Maltese Cardinal Mario Grech.
Grech said Benedict, whose birth name is Joseph Ratzinger, told the new cardinals after the consistory that "the Lord has taken away my speech in order to let me appreciate silence".
"It was a moment of joy to meet Pope Benedict again, who believed in me and made me a bishop in 2006," Grech told Vatican News.
"To see this Pastor, this man, with the years weighing on him, but at the same time lucid and smiling and with a will to communicate the experience he is making of the Spirit, really encouraged us".
The new cardinals met with Benedict after the consistory.
(ANSA).