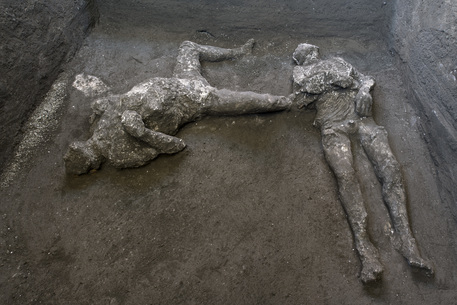 (ANSA) - NAPLES, 21 NOV - The bodies of two men, a high-status 40-year-old clad in a warm woolen cloak and his young slave in a tunic, his bones already showing the wear and tear of years of very hard work, have been discovered in Pompeii during the pandemic, ANSA can reveal in an exclusive.
It is an absolutely exceptional discovery, stresses director Massimo Osanna, because "for the first time in over 150 years, ever since the first use of the technique, it has been possible not only to make perfectly matching casts of the victims, but also to investigate and document with new technologies the things they had with them at the moment they were engulfed and killed by the eruption's boiling vapours.
The discovery was made just a few days ago at the excavation taking place at the large suburban villa at Civita Giuliana, 700 metres north-west of Pompeii, where the Archaeological Park's archaeologists have been at work since 2017, with a dig carried out in synergy with the prosecutor's office at Torre Annunziata, which was started in order to stop the clandestine digs of the tomb raiders who have left ample traces of their activities here. It is the same villa in whose stables, in 2018, archaeologists found the remains of three very purely bred horses and in particular a splendid sorrel completely decked out with a refined saddle made of bronze and wood and shining tacks as if the owner of the house, perhaps a military commander, perhaps a high-ranking magistrate, was just about to set out.
And it is the same residence where a few months ago a wall was discovered with the fresco of a white flower and a graffito with the name of the small "Mummia", a little girl who may have been the daughter of the noble owners of that estate, a residence, Osanna recalls today, "of extremely high prestige, with living areas with beautiful pavements, richly frescoed and furnished, as well as sumptuous sloping terraces overlooking the Bay of Naples and Capri, and an efficient service quarters with the kitchen garden and warehouses for oil and wine". Excavated in embryonic fashion at the start of the 20th century by the then owner of the land, Marquis Giovanni Imperiali, who then covered up the parts he had investigated and did not leave any particular documentation, the Villa of the Harnessed Sorrel concealed under a great panoramic terrace a cryptoporticus, which acted as a foundation for the villa, and stretched for more than 50 metres in length. And it was precisely in one point that gave access to to this cryptoporticus that the archaeologists found the bodies of the two fugitives. The images of the casts, which ANSA is publishing, are really exciting, with the plaster that seems to restore to the two unfortunate men the very pulsing veins of their hands, twisted by the thermic shock. Next to the bodies was a pile of thick cloth, which laboratory analysis revealed to be another heavy piece of woolen fabric, perhaps a second cloak, perhaps a blanket. The excavation, which is still ongoing, will perhaps be able to better clarify over the coming months the role of these two men and where they were headed, if for example they were trying to reach, in the underground areas of the cryptoporticus, the rest of the large extended family which lived in the estate, and which probably since early light had tried to seek salvation in the areas under the large terrace. The knowledge accumulated over the last few years on the last moments of Pompeii may already tell us when the two unfortunate men lived their last sad adventure. " According to a fairly reliable approximation," said Osanna, "it must have happened on the first morning of the second day of the eruption", and therefore around nine o'clock in the morning of the 25 October of that terrible 79 AD, when the Roman colony was engulfed by the second awful pyroclastic blast, a wave of death that spared no one. (ANSA).