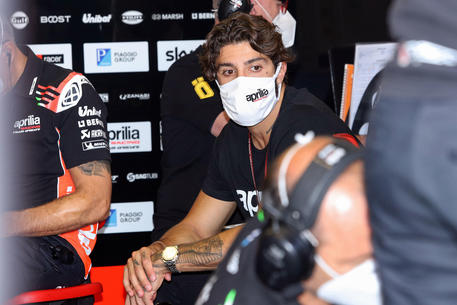 (ANSA) - ROME, NOV 10 - The Court of Arbitration for Sport (CAS) in Lausanne on Tuesday suspended Aprilia's MotoGP rider Andrea Iannone for four years starting December 17 2019, in a doping case.
In April Iannone was handed an 18-month ban by the FIM, following positive tests for a prohibited substance during last November's Malaysian MotoGP.
The ban started from 17 December, when the positive urine test was announced, and was set to run until 16 June, 2021.
Announcing the appeal to the CAS, world sport's ultimate arbiter, Aprila said Iannone's accidental consumption of steroids through food contamination was accepted by the FIM.
Iannone was also disqualified from last year's Sepang and Valencia rounds but didn't finish either race.
"My innocence was recognized. It could have been a lot worse," said the 30-year-old rider from Vasto in Abruzzo at the time of the FIM verdict.
Iannone was found guilty of using the banned steroid Drostanolone.
The CAS upheld an appeal against the FIM ban by world sport's doping body WADA.
In its appeal, WADA requested a four-year ban saying Iannone had not been convincing in claiming the positive test was due to contaminated meat eaten in a hotel in Sepang in Malaysia.
(ANSA).