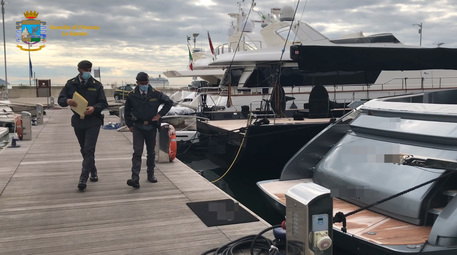 (ANSA) - LA SPEZIA, NOV 10 - Italian police on Tuesday arrested eight people in a probe into an alleged gangmastering gang who allegedly exploited Bangladeshi workers in La Spezia yacht-building worksites.
Police said dozens of workers were threatened, beaten and insulted and paid between four and five euros an hour while working on the luxury yachts.
The alleged gangmasters were arrested by police in La Spezia, nearby Savona, Ancona in Marche, and Carrara in northern Tuscany, police said.
Police also seized around one million euros in the operation, including company stakes, real estate and luxury cars.
The incriminated company was said to have employed about 150 workers, most of them Bangladeshi.
The workers were forced to do heavy and dangerous work such as welding and painting luxury super-yachts in 14-hour shifts for a maximum 4-5 euros an hour, police said.
The workers were not allowed to rest and were constantly harried and mistreated, police said.
When they got sick, even with COVID, they got no compensation, police said.
The workers' pay packets were much bigger than what they actually got because they were forced to go to bancomats and return much of the money, police said.
Polices said the alleged gangmasters took advantage of the Bangladeshi's need for money.
The company has been placed into "judicial control" to safeguard the workers' jobs, prosecutors said. (ANSA).