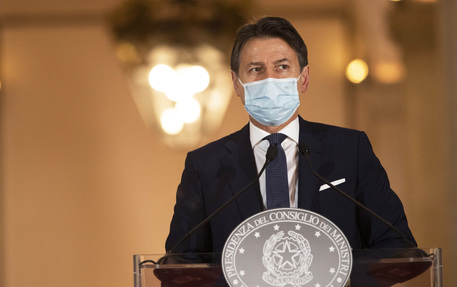 (ANSA) - ROME, OCT 19 - Premier Giuseppe Conte's government has passed a package of measures aimed at combatting the spread of COVID-19 following a sharp upswing in cases just a week after a previous decree brought in new measures.
In a bid to prevent people contracting the disease while out socializing, city and town mayors will have the power to close squares and other areas where groups gather at night at 21:00.
Restaurants and pubs will not be able to serve people at the bar after 18:00 and they will have to close if they are unable to provide table service after this time.
They had already been forced to close at midnight in the previous decree.
High schools will not be allowed to open before 9:00 as of Wednesday in a bid to ease pressure on public-transport services during the morning rush hour and prevent overcrowding.
Distance learning is to be increased too.
Local festivals and trade fairs have been banned but events of a national scale have not.
The government has intensified its restrictions on amateur contact sport, with non-professional clubs barred from playing games for team sports, although they can still train.
Apart from the high-school opening-time provision, the measures come into effect on Monday and will remain in force until November 13.
Bari Mayor Antonio Decaro, the head of local authorities association ANCI, accused the government of asking too much of Italy's mayors.
"The government wanted to shift the responsibility of the curfews onto mayors," Decaro told Radio Capital.
"It's not acceptable that the mayors have to be the ones who close the squares and streets of night life".
Regional Affairs Minister Francesco Boccia denied trying to shift responsibility for unpopular measures.
"The provision regarding the mayors has been softened," Boccia told Rainews24.
"If there is a place that needs to be closed in a city, the mayor decides.
"The mayors know that the State is at their side 24 hours a day". (ANSA).