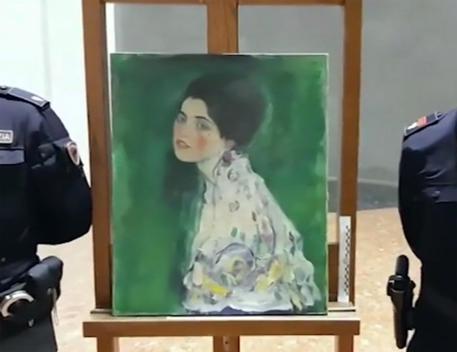 (ANSA) - PIACENZA, OCT 15 - A Klimt that was 'stolen' from a Piacenza gallery in 1997 only to mysteriously be found behind a wall there in December 2019 will go on show in the same gallery on November 28, organisers said Thursday.
Austrian master Gustav Klimt's famed Portrait of a Lady, once listed among the greatest stolen art works in the world, will be shown at the Ricci Oddi modern art gallery.
Th work will be placed in the gallery's showroom of honour and will be protected by a special security case, organisers said.
In January two Piacenza burglars confessed to stealing and then returning the Klimt portrait which was declared to be authentic after being found in the bowels of the museum in the northern town it was stolen from.
Police are still investigating reports in the local daily Liberta', to whom the thieves confessed, that a ransom was paid by a local bank.
During work to clean up ivy covering the gallery's exterior wall on December , an interspace closed by a door was discovered, behind which there was a bag containing the picture.
"This news is of historic importance for the artistic and cultural community and for the city of Piacenza," Mayor Patrizia Barbieri and Culture chief Jonathan Papamarenghi said at the time.
Barbieri and Papamarenghi thanked the experts and the police who worked on the case and "never gave up the investigation".
(ANSA).