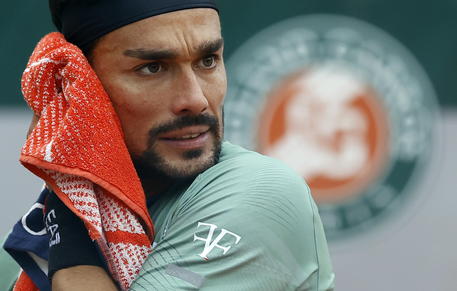 (ANSA) - ROME, OCT 14 - Italian tennis player Fabio Fognini has tested positive for COVID-19, the national tennis federation said Wednesday.
Sanremo-born Fognini, 33, currently ranked 16 in the world, came out positive after a swab was administered during the Sardinian Open in Cagliari.
Fognini was to have started in the second round against world no 96 Roberto Carballes Baena of Spain Wednesday afternoon.
His place will be taken by lucky loser Danilo Petrovic of Serbia, n.166 in the ATP ranking.
Fognini said "I have slight symptoms and I'll get better soon".
Fognini's most successful surface is clay, upon which he has won eight of his nine ATP singles titles, most notably at the 2019 Monte-Carlo Masters, as well as having reached the quarterfinals of the 2011 French Open.
Together with Simone Bolelli, Fognini won the 2015 Australian Open doubles championship, becoming the first all-Italian men's pair to win a Grand Slam title in the Open era.
Fognini is married to, and has a two-year-old son with, Flavia Pennetta, from Brindisi, a retired player who won the 2015 US Open singles title.
Pennetta, 38, is a Grand Slam champion in both singles and doubles. She became Italy's first top-ten female singles player on 17 August 2009 and the first Italian to be ranked world No. 1 in doubles on 28 February 2011. She became a Grand Slam singles champion by winning the US Open in 2015, where she defeated her childhood friend Roberta Vinci in the first all-Italian Grand Slam final.
Fognini is the latest in a string of sports stars in Italy to get the virus, including soccer legends Cristiano Ronaldo and Zlatan Ibrahimovic. (ANSA).