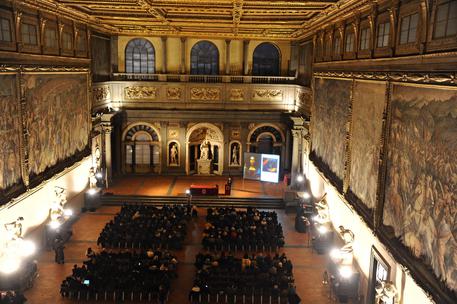 (ANSA) - FLORENCE, OCT 8 - Leonardo's fabled lost work The Battle of Anghiari is not hidden under other works in Florence's Palazzo Vecchio because he never actually painted it there, according to a new book.
"Leonardo never painted the Battle on that wall," says Virginia University art history lecturer Francesca Fiorani in the new study.
The book does not say where The Battle, which is known from copies by other artists, was in fact painted.
Fiorani said the existence of preparatory sketches and cartoons is "proven by documentary evidence" but the existence of the work is not.
Until now the fresco, the Holy Grail of art research, was believed to have been hidden by painter and art historian Giorgio Vasari when he was commissioned to do another fresco in Florence's municipal headquarters.
The discovery in March 2012 of black paint similar to that used in the Mona Lisa spurred fresh hope that the fresco may be hidden behind the wall.
But Fiorani said the pigment "was not in fact the same one used by Leonardo in the Mona Lisa".
The hunt for the lost fresco by art sleuth Maurizio Seracini was filmed by national Geographic in 2008.
Seracini, the only real-life character in Dan Brown's bestselling thriller The Da Vinci Code, said he ewas "certain the great work is there".
Seracini, of the San Diego-based Center of Interdisciplinary Science for Art, Architecture and Archaeology (CISA3), has been working on the case since he was a young researcher in 1975, when it was first suggested that Vasari hid Leonardo's fresco behind a wall rather than painting over it.
At that time, new imaging technologies provided tantalising clues but fell short of being able to let researchers 'see' clearly behind the current wall on which Vasari painted his own fresco.
The search was halted for lack of evidence in 1977 but was subsequently greenlighted again after multispectral imaging enabled Seracini to build up a stronger case.
Florence commissioned The Battle of Anghiari to celebrate its famous victory over Milan on June 29, 1440.
It was described by sculptor Benvenuto Cellini (1500-1571) as a ''ground-breaking masterpiece'' that any artist simply had to see and study.
In a 1549 letter to a Venetian friend, Florentine painter Anton Francesco Doni called it ''a miraculous thing''.
The work has long been known from sketches and copies.
But the original was thought lost for ever - a victim of Leonardo's typically unorthodox decision to jettison the traditional technique of applying paint to wet plaster.
Leonardo (1452-1519) needed time for his painstaking approach and so used oils directly on the dry plaster allegedly in Palazzo Vecchio, the symbol of Florentine civic pride.
Like the Last Supper in Milan it soon began to crumble, helped on its way by a thunderstorm that hit the unfinished building.
Leonardo gave up and headed for Milan.
Originally, the Leonardo work was to have stood opposite another grand martial fresco by Michelangelo, on the other side of the Salone.
But Michelangelo didn't even start it.
Experts have been sure, however, that some version of Anghiari survived. Under pressure from Seracini, officials knocked through two square metres of the Vasari in 1979 - but found nothing. (ANSA).