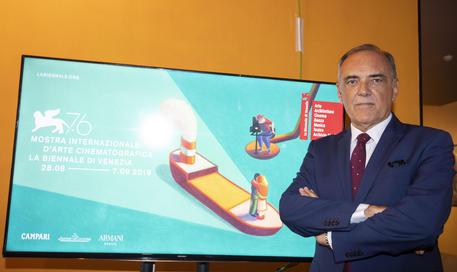 (ANSA) - VENICE, JUL 7 - There will be fewer films and social distancing will be enforced at this year's Venice Film Festival from September 2.12, organisers said Tuesday.
"The overall number of films in the official section will be reduced, albeit in a contained way, in the new edition," they said.
Artistic Director Alberto Barbera told ANSA the fest, the oldest in the world, will "not be indigenous or euro-centric".
He said it would be "an entirely international festival".
Barbera said that American, Chinese and Indian cinema would be fairly represented.
On the Hollywood front, he said that "there won't be the big blockbusters, either because they aren't ready or because they've been postponed, also in consideration for the new, later Oscar date".
"But there will be room for literally everyone in this festival of restarting, including Chinese, Indian and middle eastern films.
"In short, the same representativeness as ever". (ANSA).