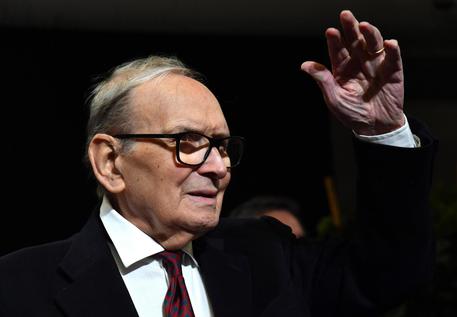 (ANSA) - ROME, JUL 6 - Italian film composer Ennio Morricone, who scored the spaghetti westerns that made Clint Eastwood a star, has died at the age of 91.
Morricone, who wrote the music for all of Sergio Leone's film including Eastwood's Dollar trilogy, A Fistful of Dynamite, Once Upon A Time in the West and Once Upon A Time in America, died a few days after breaking a leg in a fall at his Rome home.
Morricone won an honorary Academy Award in 2007 and an Oscar in 2016 for Quentin Tarantino's The Hateful Eight.
He was nominated for several other Oscars including Mission, The Untouchables, Days of Heaven, Bugsy and Malena. Among his other scores were Novecento, Cinema Paradiso and Bulworth.
Italian President Sergio Mattarella led the tributes saying Morricone had been a "brilliant artist".
Mattarella said: "A musician at once refined and popular, he left a deep mark in the musical history of the postwar period".
Premier Giuseppe Conte said Morricone "made us dream, thrill, and reflect, writing memorable notes that will remain etched in the history of music and cinema".
Conductor Riccardo Muti said "he was an extraordinary musician not only for his film scores but also for his classical compositions".
Malena star Monica Belleccui said "he made the world better with his music".
Morricone penned his own death notice saying "the most painful farewell to my wife Maria".
In the note, which will be published in major newspapers Tuesday, he recalls Cinema Paradiso and Malena director Giuseppe Tornatore "with affection".
He also explains that he wanted a private funeral "for one reason alone: I don't want to disturb".
Born in Rome in November 1928, Morricone showed youthful for AS Roma soccer club before going on to create 500 film and TV soundtracks.
He also conducted orchestras and in June 2015 he presented his Missa Papae Francisci, composed in honour of Pope Francis.
Cult director Tarantino compared Morricone to Mozart, Beethoven and Schubert when he picked up a Golden Globe for him in 2016.
(ANSA).