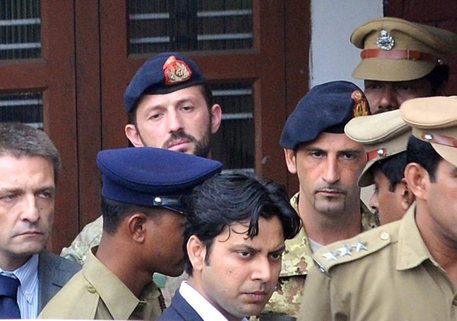 (ANSA) - ROME, JUL 2 - The International Tribunal of Arbitration on Thursday ruled in Italy's favour in the case of two Italian marines accused of killing two Indian fishermen off the southern Indian coast in February 2012 - but Italy will have to pay India compensation for the loss of life.
The court gave Italy jurisdiction in the case of Marina Massimiliano Latorre and Salvatore Girone, who fired on the fishermen after mistaking them for pirates while on duty off the coast of Kerala on the merchant ship Enrica Lexie.
India was denied jurisdiction over the pair of fusiliers.
The men's immunity was recognised.
The tribunal's ruling that the marines were doing their national duty and thus subject to the 'flag law' was announced by the Italian foreign ministry.
In ordering compensation to be paid, the court said "Italy violated freedom of navigation and thus will have to compensate India for the loss of human lives, the material damage to their vessel and the moral damage suffered by the commander and other members of the Indian trawler Saint Anthony".
The tribunal urged the two countries to come to an agreement on the compensation to be paid.
The Italian foreign ministry said Italy would restart criminal proceedings in the case.
The arbitration tribunal first sat on the case in The Hague in November 2015.
Commenting on the ruling, Foreign Minister Luigi Di Maio said "today a definitive full stop has been placed after a long agony. Hugs to the two marines and their families." He said "we have never stopped following this case, but I want to also thank those who preceded me for the constancy and determination shown in this affair.
"Italy will naturally respect what the arbitration tribunal has established, with a spirit of collaboration".
Defence Minister Lorenzo Guerini also welcomed The Hague court's ruling saying it had "put an end to an affair that had dragged on for years, particularly heavy for its human aspects.
"For this reason I send an affectionate thought to our two marines and their families for the difficult moments which they went rhough".
The case has caused friction between Italy and India.
Shortly after the incident, the Indian Navy intercepted the MV Enrica Lexie and detained the two Italian marines. That sparked the conflict of opinions over legal jurisdiction and functional immunity between the governments of India and Italy and continued to cause diplomatic tension between the two nations.
After having been detained in India with no formal charges for two and four years, respectively, the two marines were finally released and returned to Italy. Meanwhile, the independent United Nations court was charged to resolve the conflict of jurisdiction, following a European Parliament resolution of January 2015, stating that "no charge has been brought by the Indian authorities" and that "Italian marines' detention without charge was a serious breach of their human rights".
While tangential, the incident drew attention to the practice of commercial shipping using armed guards.
The controversy also had major commercial implications between Italy and India. (ANSA).