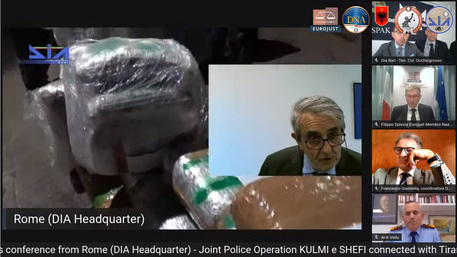 (ANSA) - BARI, JUN 30 - A Carabinieri police officer was among 37 people arrested in Italy and Albania as police broke up what they called a "massive" trans-Adriatic drug smuggling operation on Tuesday.
The Carabiniere, working in Bari in Puglia, is suspected of tipping off an Albanian narco trafficker about police operations, police said.
Some 27 people were arrested in Italy and 10 more in Albania.
The alleged drug trafficking offences took place between 2017 and 2018, police said.
Two Albanian informants helped police with their inquiries.
A swathe of assets were seized including a coffee factory in Albania.
Police said the gang smuggled "huge" quantities of drugs including marijuana, cocaine and hashish, with a street value of over 40 million euros, and the equivalent of seven million doses. (ANSA).