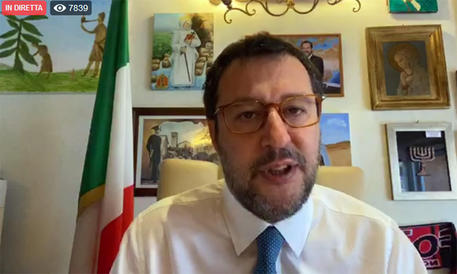 (ANSA) - Rome, May 26 - A Senate immunity panel on Tuesday rejected prosecutors' requests to send former interior minister Matteo Salvini to trial for allegedly 'kidnapping' rescued migrants in the Open Arms case.
The panel voted by 13 to seven against the prosecutors' request to lift opposition League party leader Salvini's parliamentary immunity to face trial in the case.
One of he government parties, former premier Matteo Renzi's centrist Italia Viva (IV), did not take part in the vote saying the case had not been examined thoroughly enough. They said they would wait for the case to be examined by the whole of the Senate to express their position.
Despite it not being the final word in the case, Salvini was jubilant.
"The Senate panel voted and established that Salvini did his duty, acted in the public and not private interest," he said.
Salvini is under investigation in the city of Agrigento, Sicily for abduction and dereliction of duty because he didn't allow the Open Arms rescue ship to dock.
Prosecutors in Agrigento are looking specifically at the case of 164 migrants who were rescued by the NGO-run ship Open Arms in early August. Salvini had refused to let them disembark in Italy. The Open Arms spent almost three weeks at sea until it was finally allowed to dock at the Italian island of Lampedusa.
A Catania judge on Monday put off, for the third time due to the coronavirus crisis, a preliminary hearing into Salvini's alleged 'kidnapping' of rescued migrants aboard a coast guard ship in a previous and similar case, last July.
The hearing will take place on October 3, the judge ruled.
League leader Salvini refused a landing berth to the 131 migrants aboard the Gregoretti ship from July 27 to 31, when authorisation to land at Augusta near Siracusa came from a judge.
It is one of several migrant 'kidnap' cases in which prosecutors have asked to put Salvini on trial.
He has described any such trial as a "badge of honour".
Salvini says he was defending Italy's borders.
During his 14-month stint as interior minister Salvini denied access to Italian waters to NGO run migrant rescue ships.