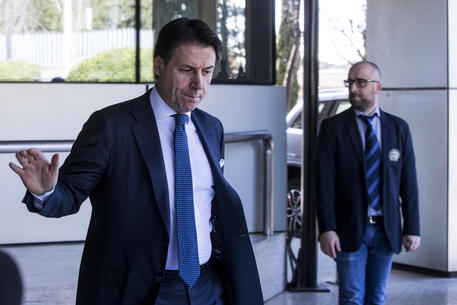 (ANSA) - Rome, February 27 - Premier Giuseppe Conte on Thursday dismissed speculation that his administration could be replaced by a government of national unity to face the coronavirus emergency featuring Matteo Salvini's right-wing League party.
"We are already in a united government," Conte said. Salvini has been highly critical of the government's handling of the coronavirus emergency.
When asked about the League being in a national unity government on Thursday, Salvini said that the party was "in favour of accompanying the country out of the quagmire, in order to accompany it to elections.
"This government team is not fit to handle normality, never mind an emergency," added Salvini, who was interior minister and deputy premier in the first Conte government before he pulled the plug on it last year and prompted the premier to put together a new governing coalition.
According to some reports, the Italia Viva (IV) party of ex-premier Matteo Renzi, who has clashed with Conte over justice reforms recently, was inclined to consider the idea of the national unity government.
But Renzi, whose party is part of the ruling coalition, said these reports were nothing more than gossip on Thursday.
Several members of the ruling centre-left Democratic Party (PD) ruled out the idea of being allied with Salvini.
The PD is in government with the anti-establishment 5-Star Movement (M5S), the senior partner; IV; and the small leftwing Free and Equal (LeU) party.