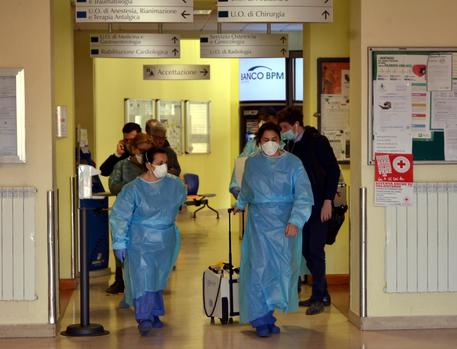 (ANSA) - Rome, February 21 - Officials said Friday that 14 people have been infected with the coronavirus in Lombardy, while two other cases have been identified in Veneto.
People in several towns in Lombardy have been told to stay at home and avoid social contact.
"There have already been clusters (of the deadly virus) in Europe - in Germany and France," Health Minister Roberto Speranza said.
"Italy is ready. We had already prepared a plan because it was evident that what happened could happen.
"Now it's a question of applying the plan. "Clearly this plan features immediate decisions for the areas of the outbreak in order to limit it". Giuseppe Ippolito, scientific director of Italy's top infectious disease hospital, the Spallanzani in Rome, said "the cases reported in Lombardy are the first registered on Italian territory and take us into a new phase.
The first case is a man, 38, who is believed to have got the virus after dining with a friend who had come back from China.
The other two initially infected people are the 38-year-old's wife, a pregnant teacher on maternity leave, and a third person who went to hospital suffering symptoms of pneumonia after doing sport with the 38-year-old.
They are members of the same running club.
The teacher had not been in contact with children.
Three others are elderly clients of a bar Codogno, near Lodi, owned by the father of the man who did sport with the 38-year-old, sources said. The three customers never came into direct contact with the 38-year-old, according to the sources.
Lombardy Welfare Councillor Giulio Gallera said that the eight other cases in the region included "five health personnel, nurses and doctors from Codogno hospital, and three patients".
The town has closed schools, bars, eateries, discos, dancehalls, gambling arcades and sporting facilities as a precaution at least until Sunday.
Veneto Governor Luca Zaia said the two cases in his region regarded to elderly people from the town of Vo' Euganeo, one of whom is "in a critical condition in intensive care" in Padua.
He said neither of them had been to China and said schools and shops in Vo' Euganeo were being closed.