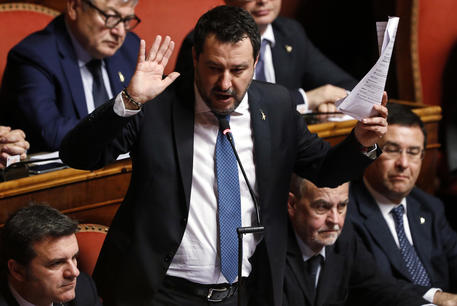 (ANSA) - Rome, February 12 - The Senate on Wednesday voted to allow prosecutors to proceed against League leader Matteo Salvini for allegedly illegally detaining a group of migrants when he was interior minister in a previous government.
The case regards Salvini's decision to not allow more than 100 rescued migrants to disembark from the Gregoretti Coast Guard ship for several days during a long standoff in July.
The Senate's immunity panel had already given the OK for the Catania court of ministers' request to parliament to proceed against Salvini for allegedly abusing his power and the floor of the Upper House has now ratified the decision to lift Salvini's parliamentary immunity.
Salvini, who operated a closed ports policy while interior minister in the last government, sending the League's poll ratings sky-high, faced prosecution before but his parliamentary immunity was never lifted so he could go to trial in previous similar cases.
"I'm absolutely relaxed about this and proud of what I did," Salvini told ANSA after the vote, which members of his party did not take part in.
"I'll do it again as soon as I get back in government.
"I swore on the Constitution, which says that defending the nation is every citizen's duty.
"I defended Italy". Salvini argued that, as in other such cases, his decision was made with the rest of the government he was then part of.
Premier Giuseppe Conte, on the other hand, said he was not involved in the specific decision of whether to allow the migrants to disembark.
Salvini pulled the plug on Conte's first government in August prompting the creation of a new ruling majority.