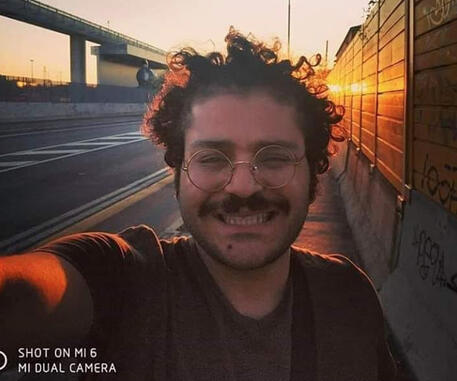 (ANSA) - Rome, February 10 - Italy has got the EU to monitor the case of a 27-year-old Egyptian studying at Bologna University who has been arrested in Cairo in a case which rights groups say might be similar to that of Giulio Regeni, the 28-year-old Cambridge doctoral researcher tortured to death in the Egyptian capital in early 2016.
Patrick George Zaki was arrested last Thursday at Cairo airport and his lawyer says he was tortured with electrical cables.
The human rights lawyer, Wael Ghally, told Il Fatto Quotidiano newspaper Sunday that "he was not beaten with sticks so as not to leave marks of torture".
Zaki is also a human rights activist as well as being a student at Bologna, where he is doing a master's in gender studies.
Amnesty International also says Zaki was tortured, as does his family.
Zaki has been charged with instigation to protest and spreading false news.
The Italian foreign ministry said Sunday that Foreign Minister Luigi Di Maio has been following the case "from the start".
It said Di Maio had asked the EU to set up monitoring of Zaki's case via its embassies in Cairo.
For the moment Zaki has been placed in preventive custody for 15 days.
Amnesty said the case reminded them of that of Regeni, a student from Friuli who was researching the politically sensitive subject of street sellers' unions, whose leader had fingered him as a spy to secret services.
Regeni's father said last week that failings in the effort to get to the bottom of his son's death were not limited to the Egyptian side.
In particular, he took issue with Italy's failure to recall its ambassador to Cairo in protest at the lack of cooperation from the Egyptian authorities.
"There are grey zones both on the side of the Egyptian government, which is recalcitrant and does not cooperate as it should, and on the Italian side, which has not yet withdrawn our ambassador to Cairo," Claudio Regeni told the parliamentary commission of inquiry into his son's murder.
"We have been calling for the ambassador's withdrawal for some time".
The mutilated body of the Cambridge researcher into Cairo street unions was found on the highway to Alexandria on February 3, 2016, a week after he disappeared in the Egyptian capital on January 25, the heavily policed fifth anniversary of the uprising that ousted former strongman Hosni Mubarak.
His mother said she had only been able to recognise him "by the tip of his nose".
Magistrate Giuseppe Pignatone, who was Rome chief prosecutor at the time of Regeni's killing, said Monday that the Cairo prosecutor's office hasn't made any progress on the investigation since December 2017, when Rome named five members of the Egyptian security apparatus as suspects.
At various stages, Egypt has put out several purported explanations for his death including a car accident, a gay lovers' tiff turned ugly and a kidnapping for ransom in which the alleged gang, criminals but later found innocent of the Regeni murder, were wiped out after his documents had been planted at their lair.
Judicial cooperation between Rome and Cairo prosecutors dried up after the Roman prosecutors placed the five members of the security apparatus under investigation.
Last month Rome prosecutors Sergio Colaiocco and Michele Prestipino said that Regeni was caught by a "spider's web" spun by the Egyptian security services.
"A spider's web was spun around Giulio Regeni by the Egyptian National Security Service in October (2015) before the kidnapping and murder," Colaiocco and Prestipino told a parliamentary commission of inquiry into the Friuli-born student's death.
"A spider's web in which the (security) apparatus used the people who were closest to Giulio in Cairo, including his lawyer flat mate, the street traders union representative and Noura Whaby, his friend who helped him with translations".
"It was a spider's web that closed in more and more and which Giulio ended up in the middle of".
Egyptian President Abdel Fattah el-Sisi has denied any official involvement in Regeni's death.
Sisi reiterated to Premier Giuseppe Conte in Cairo last month that Egypt wants to get to the truth in the case.