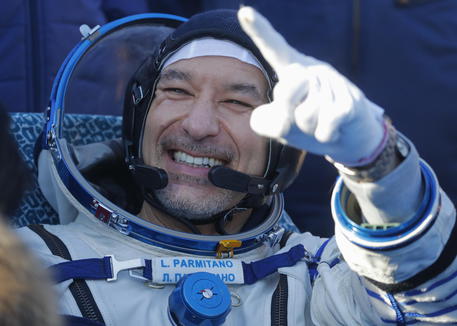 (ANSA) - Milan, February 7 - Italian astronaut Luca Parmitano said Friday "I feel very fit considering I've just got back from a long-term mission," in his first interview since landing in Kazakhstan Thursday after his spell as first European commander of the International Space Station.
Parmitano aka 'AstroLuca' stepped out of a Soyuz shuttle in Kazakhstan and smiled to onlookers Thursday afternoon.
He came back down to earth with colleagues Alexander Skvortsov and Christina Koch.
"Welcome back Luca Parmitano, who after 201 days of activity in space has returned to earth successfully landing in Kazakghstan," said Riccardo Fraccaro, cabinet secretary with the space brief.
"AstroLuca represents the excellence of Italy in the sector, we are proud of him.
"I'm looking forward to meeting him at the premier's office as soon as possible to work together on our country's space policy".
Earlier this month Parmitano chatted to Italian Premier Giuseppe Conte in a video link from the ISS.
"Welcome aboard the International Space Station," said the Italian astronaut, who is the current commander of the ISS and has been leading a series of tough spacewalks to service the cosmic-particle-hunting Alpha Magnetic Spectrometer (AMS-02).
"I'm excited," replied Conte.
"The Space Station is humanity's outpost in space and it is its greatest feat of engineering.
"Space and scientific research are strategic sectors for Italy which the government intends to keep focusing on.
"It's a strategic sector because involvement from the technological point of view makes it possible to develop increasing awareness of our planet".
Parmitano, who is widely known by his Twitter handle Astroluca, also hailed Italy's efforts on the space-science front.
"Italy is on the podium," he said.
"Many of the Italian experiments (on the ISS) are innovative," he added, citing the example of the newly installed Italian Mini-Euso telescope.
"It will be able to shoot over 100,000 ultraviolet photos a second".
Conte asked Parmitano for his assessment so far of the Beyond mission, with the Italian set to return to Earth on February 6.
"The whole mission has achieved superlative results in terms of the quantity of work done and this is only thanks to the crew," he said.
"We are a highly important example of team work.
"There are three very demanding weeks to go before the end of the mission.
"Every spacewalk has a very high risk component.
"You just have to remember that a fault in my space suit (during a spacewalk) six years ago caused a water leak in the helmet, putting my life in danger.
"Although this mission's space walks have a much higher tariff, there haven't been an technical difficulties, apart from the job itself.
"It was particularly difficult to have worked almost totally from the Canadarm, with my legs locked to the robotic arm my only link to the Space Station".