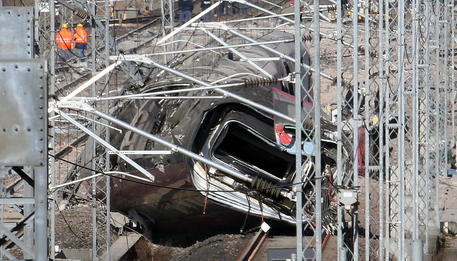 (ANSA) - Milan, February 6 - A high-speed train derailed near Lodi in northern Italy on Thursday killing the two drivers and injuring 31 passengers and staff.
The train, travelling from Milan to Salerno, was outside Livraga when the accident happened.
Two of the injured have been taken to hospital in code yellow.
According to a preliminary reconstruction, the train's engine derailed and first hit a trolley car that was on a parallel line and then hitting a railway building where it came to a halt.
The rest of the train was said to have continued running until the second carriage overturned.
Maintenance work was being done on the line at the time of the crash.
Circulation on the high-speed Milan-Bologna line has been suspended.
All convoys have been rerouted onto the conventional line between Milan and Piacenza.
There are delays of up to 60 minutes.
The drivers were named as Giuseppe Cicciù, 51, from Reggio Calabria, and Mario Di Cuonzo, 59, from Capua.
Cicciù's last Facebook post, in October, said "prevention has always been the best weapon!", referring to possible rail accidents.
President Sergio Mattarella voiced his condolences and called the drivers "two new victims of work".
He voiced the hope that "light will soon be shed on the causes of the serious accident, to guarantee the right of citizens to safety and security in transport".
Railway unions called a two-hour strike from noon to two o'clock in the afternoon Friday to protest against the "extremely grave" incident.
They said it was "unacceptable" that such accidents occurred in the Italian rail system, one of the safest in the world.
The train was travelling at around 290 kph in the stretch where it derailed, sources said.
One of those injured, a 21-year-old man at Piacenza hospital, told local daily Libertà "I thought I was dead".
"The train was going extremely fast, perhaps at 300 an hour, when I felt a very big bang and heard an extremely loud crash".