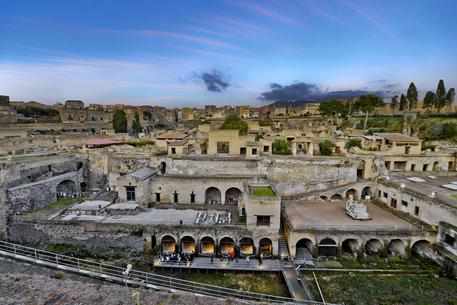 (ANSA) - Herculaneum, January 28 - Anthropologist Pier Paolo Petrone is the lead author of a study published in The New England Journal of Medicine that revealed vitrified brain tissue found in the skull of the caretaker of the College of Augustales following the eruption of Vesuvius in 79 AD.
The completely carbonized body was wrapped in a sponge-like solid substance and discovered lying face-down in bed, suggesting that perhaps the caretaker was sleeping when the eruption occurred.
The study, conducted together with Professor Piero Pucci of the Genetic-Advanced Biotechnologies Centre (Ceinge) in Naples, Professor Massimo Niola of the University of Naples Federico II, and researchers from Cambridge University, took place thanks to a decade-long collaboration with the Herculaneum Archaeological Park and its director Francesco Sirano.
The study examined in detail the caretaker's remains, which were first discovered in the 1960s in a small room in the College of the Augustales in ancient Herculaneum.
Petrone conducted the research in his Human Osteobiology and Forensic Anthropology laboratory in the Advanced Biomedical Sciences Department of the University of Naples Federico II.
"Over the years, parts of the skull had been removed, and by removing the volcanic ash, I was able to observe the inside of the cranium," Petrone said.
"I saw black, glassy fragments that sparkled. After taking a fragment and closely observing it, I thought it had to be the vitrified remains of the brain, also because there was no trace of it in the body, nor on the site," he said. After this initial observation, Petrone teamed with Pucci to analyse the fragment in the laboratory at Ceinge to prove his theory.
After these analyses as well as further proof requested by the medical journal, Petrone discovered the fragment had "seven enzymes highly represented in all human brain tissue, such as amigdala, hypothalamus, frontal cortex, etcetera". "Vitrification is an effect of exposure to a high temperature followed by a rapid cooling," Petrone said.
"It's the first time ever that the vitrified remains of brain tissue have been found, not only in an archaeological context, but also in a forensic context. The process of vitrification, as we demonstrated with our analyses, even after 2,000 years can leave biological traces intact that otherwise would not have been preserved," he said.
"The analyses that we carried out at Roma Tre University with Professor Guido Giordano and his team established a temperature from wood found in the College of between 480 and 520 degrees Celsius," Petrone said.