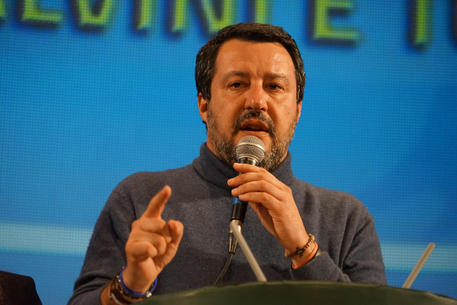 (ANSA) - Rome, January 23 - The influential Italian Bishops Conference (CEI) on Thursday joined criticism of nationalist opposition League leader Matteo Salvini ringing the doorbell of a Tunisian family in Bologna and asking if a drug pusher was there.
"It was not a particularly felicitous attitude," said CEI Secretary General Msgr Stefano Russo.
Tunisia's ambassador to Italy on Wednesday said populist strongman Salvini was guilty of "deplorable provocation" after the anti-migrant former interior minister heavily publicised anti-drugs stunt in the Emilian capital.
Ambassador Moez Sinaoui told ANSA he had written to Senate Speaker Maria Elisebetta Casllati to complain about Senator Salvini's "regrettable" behaviour, which he said had shown "a lack of respect for the private abode of a Tunisian family" and had been "divulged in an ostentatious way to public opinion".
Sinaoui voiced his "consternation" at the "shameful episode".
He told ANSA: "I voiced my consternation to Speaker Casellati because this gesture comes from a member of the Senate, a high institution of Italy, with which Tunisia has a long history of friendship, in particular between the two parliaments." In the case, Sinaoui said, "a Tunisian family has been stigmatised, and we don't want members of our community to be stigmatised in an illegitimate way in an electoral campaign.
Emilia Romagna, the region around Bologna, elects a new government and governor on Sunday. Earlier Wednesday the Tunisian parliament's deputy speaker said Salvini had shown himself to be a "racist" in the case.
The incident in Bologna's high crime working class Pilastro district showed "a racist and shameful attitude that undermines relations between Italy and Tunisia," said the official, Osama Sghaier. Salvini was led to the flat by a local mother of a dead addict who told him a pusher allegedly lived there.
He commended her actions, saying more people should show such concern for their communities.
Salvini rang the bell of the Tunisian family and said "good evening madam, is your son a drug pusher?".
Anti-migrant Euroskeptic League leader Salvini has been criticised for anti-migrant policies he enacted as interior minister in the last government.
These including shutting Italy's ports to NGO rum migrant rescue ships, and a migrant and security decree which critics said criminalised migrants by stripping them of certain rights.
Salvini responded to the Tunisian official's charge by saying "I listened to the cry of pain from a mother courage who lost her son to drugs.
"An act of appreciation that we should all do: the fight against drug pushers should unite and not divide.
"Zero tolerance for drugs and pushers of death: for us it is a priority.
"In Emilia Romagna and in the whole of Italy there are decent hardworking immigrants, who have integrated and respect the law.
But those who push drugs are a problem for all: whether they are Italian or foreign, it makes no difference." Salvini is campaigning hard in Emilia Romagna ahead of the regional elections there on Sunday.
The alleged pusher, 17, said Wednesday he was seeking legal advice from a local lawyer who has set up a campaign against hate speech, Cathy La Torre.
The youth was born in Italy of Tunisian parents. His father has also resorted to La Torre's services.
Popular leftwing DJ, writer and actor Fabio Volo mocked Salvini for "only taking it out on the weak" saying "go and ring the doorbell of the Camorra", the Naples mafia, "if you have the balls for it".
Volo's remark went viral, with most commentators on social media appearing to agree with him.
But Leaguers and members of their two allies, Silvio Berlusconi's centre-right Forza Italia (FI) party and Giorgia Meloni's far-right Brothers of Italy (Fd)) party, said the League leader had "only been doing his civic duty".
Italian police have not said whether the youth has been pulled up for pushing or not.