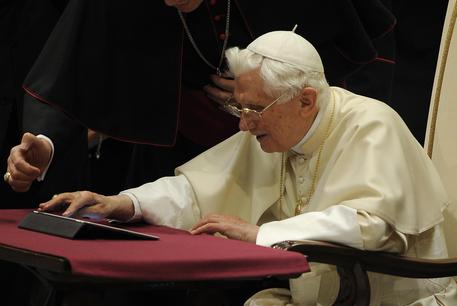 (ANSA) - Vatican City, January 14 - Benedict XVI's personal secretary Georg Gänswein told ANSA on Tuesday that he has requested the former pope's name as the co-author of a controversial new book be removed. In comments in the book presented as being co-authored with Cardinal Robert Sarah, Benedict is quoted as saying that celibacy is of "great significance" as it ensures clergymen can focus on their job. The case has caused controversy as Pope Francis is considering a proposal to allow married men to be ordained in the Amazon region.
"I can confirm that this morning I acted on instructions from the emeritus pope and I asked Cardinal Robert Sarah to contact the book's publishers and request them to remove Benedict XVI's name as co-author of the book and remove his signature from the introduction and the conclusions too," Gänswein told ANSA. "The pope emeritus knew that the cardinal was preparing a book and he sent him a text on the priesthood authorizing him to use it as he wanted.
"But he did not approve a project for a co-authored book and he had not seen or authorized the cover.
"It is a misunderstanding that does not raise questions about Cardinal Sarah's good faith". Sarah said the authorship of the book would change but the content would not.
"Considering the controversy caused by the publication of the the book 'From the Depth of Our Hearts', it has been decided that the author of the book will be 'Cardinal Sarah with the contribution of Benedict XVI'," Sarah said in a tweet.
"Nevertheless, the complete text will remain completely unchanged". However, the book's Paris-based publisher, Fayard told ANSA that "discussions are still taking place" about what will happen.
The book is scheduled to come out in France on Wednesday. Earlier on Tuesday, Sarah had denied that Benedict XVI was unaware that some of his opinions about priestly celibacy would be used in the book. "I solemnly say that Benedict XVI knew that our project would take the form of a book," Sarah said via Twitter. "I can say that we exchanged several drafts to set the corrections". The 92-year-old German became the first pope to resign in almost 600 years when he stepped down in 2013. Sarah added that the book was not an attack on Pope Francis.
"My attachment to Benedict XVI remains intact and my obedience to Pope Francis is absolute," he said.