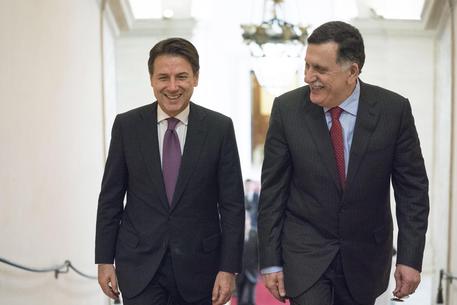 (ANSA) - Rome, December 23 - Libyan Government of National Accord (GNA) Prime Minister Fayez al-Serraj, whose Tripoli-based administration is recognised by the United Nations, has confirmed that he asked Italy for weapons to repel the offensive staged by Field Marshall Khalifa Haftar. "We asked for weapons from many countries, including Italy, which has the right to choose the policy it likes most," Serraj said in an interview in Monday's Corriere della Sera when asked about the assistance being provided by Turkey. "Relations remain excellent anyway. In truth, an official response never came from Rome". Italian Foreign Minister Luigi Di Maio said the solution to the Libya crisis "cannot be military" as he visited the North African country for talks with both sides in the conflict last week.
Di Maio had meetings with Serraj and Haftar, who commands forces based in eastern Libya. "We had a rich exchange of opinions with Di Maio," Serraj said in the interview.
"As for the visit to our assailant in Benghazi and Tobruk, I didn't see anything of substance". The office of the UN High Commissioner for Human Rights has expressed concern about the deteriorating human rights situation in Libya, including the impact of the ongoing conflict on civilians, attacks against human rights defenders and journalists, treatment of migrants and refugees, conditions of detention and impunity. "In 2019, our Office along with the UN Support Mission in Libya (UNSMIL) has so far documented at least 284 civilian deaths and 363 injuries as a result of the armed conflict in Libya - an increase of more than a quarter over the number of casualties recorded during the same period last year," it said.
"Airstrikes were the leading cause of civilian casualties, accounting for 182 deaths and 212 injuries, followed by ground fighting, improvised explosive devices, abductions and killings.
"During the same period, the World Health Organization has documented 61 conflict-related attacks against health care facilities and personnel, which is a 69% increase compared to the same period in 2018".