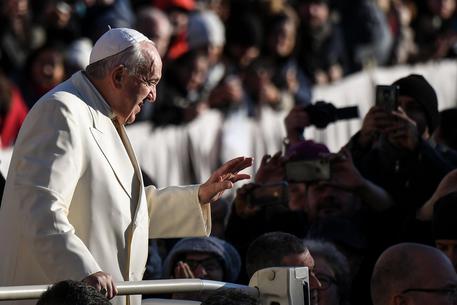 (ANSA) - Vatican City, December 4 - Pope Francis has blasted the international community's weak response to the climate crisis in his message to participants at the COP 25 United Nations Conference on Climate in Madrid. "On December 12, 2015, the COP 21 adopted the Paris Agreement, the implementation of which 'will require concerted commitment and generous dedication by each one'," read the message, which the Vatican released on Wednesday.
"Its rapid entry into force, in less than a year, and the numerous meetings and debates aimed at reflecting on one of the main challenges for humanity, that of climate change, and at identifying the best ways to implement the Paris Agreement, showed a growing awareness on the part of the various actors of the international community of the importance and need to 'work together in building our common home'.
"Sadly, after four years, we must admit that this awareness is still rather weak, unable to respond adequately to that strong sense of urgency for rapid action called for by the scientific data at our disposal, such as those described by the recent Special Reports of the Intergovernmental Panel on Climate Change (IPCC).
"These studies show that the current commitments made by States to mitigate and adapt to climate change are far from those actually needed to achieve the goals set by the Paris Agreement.
"They demonstrate how far words are from concrete actions!"