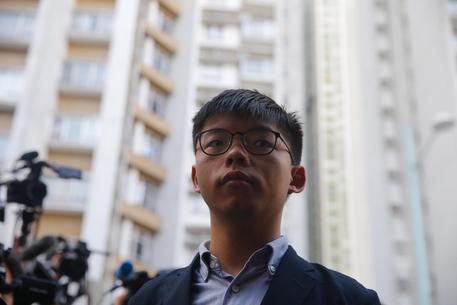 (ANSA) - Rome, November 29 - The Chinese embassy spokesman in Rome on Friday tweeted on Thursday's conference at the Senate organised by the nationalist Brothers of Italy (FdI) party and the Radical party with Hong Kong pro-democracy movement leader Joshua Wong in videolink that "Joshua Wong distorted reality, legitimising violence, and asked for the interference of foreign forces in Hong Kong's affairs. The Italian politicians who did the videoconference with him showed irresponsible conduct." FdI leader Giorgia Meloni retorted that "we are stunned by the arrogance and effrontery with which Beijing's (embassy) went so far as to censure the initiative of some MPs by describing it as 'irresponsible'.
She said FdI would ask the parliamentary speakers to "make heard immediately and strongly the voice of the Italian parliament in defence of the sacrosanct right of MPs and Senators to express their ideas and organise the initiatives they desire". Wong told the Senate on the video-link Thursday that Italy is supplying some of the means of "repression" of pro-democracy protests in Hong Kong.
"For five months we have been living through the brutality of the police, which now uses firearms against demonstrators," he said.
"Furthermore, there are also Italian firms that contribute, and supply their means, including auto vehicles.
"I think a responsible country like Italy should show how much it cares for freedom and take adequate measures in this regard".
Wong also said he was "disappointed by the indifference" of Foreign Minister Luigi Di Maio, who has described the protests as an internal Chinese matter, and warned Di Maio to be "careful" about the Belt &Road Initiative, or new Silk Road, which Italy has been alone in western nations in signing up to.
"There are no free lunches," he said. Wong was taking part in a press conference on Hong Kong at the Senate.
Joshua Wong Chi-fung, 23, is a Hong Kong student activist and politician who serves as secretary-general of pro-democracy party Demosistō. Wong was previously convenor and founder of the Hong Kong student activist group Scholarism.
Wong first rose to international prominence during the 2014 Hong Kong protests, and his pivotal role in the Umbrella Movement resulted in his inclusion in TIME magazine's Most Influential Teens of 2014 and nomination for its 2014 Person of the Year;he was further called one of the "world's greatest leaders" by Fortune magazine in 2015, and nominated for the Nobel Peace Prize in 2017.
In August 2017, Wong and two other pro-democracy activists were convicted and jailed for their roles in the occupation of Civic Square at the incipient stage of the 2014 Occupy Central protests; in January 2018, Wong was convicted and jailed again for failing to comply with a court order for clearance of the Mong Kok protest site during the Hong Kong protests in 2014.
He also played a major role in persuading US politicians to pass the Hong Kong Human Rights and Democracy Act during the 2019 Hong Kong protests. Wong was disqualified by the Hong Kong government from running in forthcoming District Council elections.