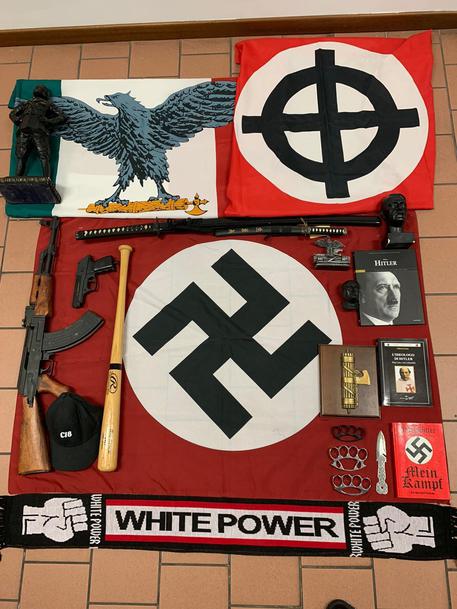 (ANSA) - Rome, November 28 - Police on Thursday staged a big operation to gather evidence for a probe into a group of far-right extremists who allegedly wanted to found a new Nazi party in Italy. The homes of 19 alleged right-wing extremists in various parts of Italy were searched.
The suspects allegedly wanted to create an openly pro-Nazi, xenophobic, anti-Semitic group called the "Partito Nazionalsocialista Italiano dei Lavoratori" - the Italian National Socialist Workers' Party. Some of the suspects allegedly had access to arms and explosives and conducted recruitment activities on social media.
Among the people implicated in the probe is an ex-con who is thought to be a senior figure in the Calabria-based 'Ndrangheta mafia.
This person is a former State witness and a former member of the Forza Nuova far-right group, sources said.
The suspects allegedly set up a chat group for the military-style training of militants and made contact with other neo-Nazi groups outside Italy, including the 'Aryan White Machine - C18' and Portugal's 'Nova Ordem Social'. A 50-year-old woman based in Padua who works in administration and has no criminal record was allegedly a senior member of the group.
She allegedly went by the name of "Hitler's Sergeant Major" and investigators found swastikas, Nazi flags and anti-Semitic material at her home.
Another suspect is a 26-year-old woman from Sicily who won an online beauty contest called 'Miss Hitler' and spoke at a far-right conference in Lisbon in August.