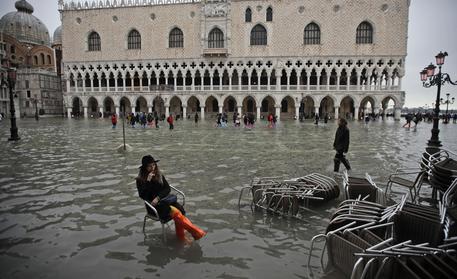 (ANSA) - Venice, November 13 - Venice was in a state of crisis on Wednesday due to huge flooding after the high-water mark reached 187cm late on Tuesday, the highest level since the record 1966 flood.
"Venice is on its knees," Venice Mayor Luigi Brugnaro said via Twitter. "St Mark's Basilica has suffered serious damage, like the whole city and the islands... We need everyone's help to get through the next few days that are putting us to the test.". A 78-year-old man was electrocuted due a short circuit, apparently linked to the flooding, at his home on the island of Pellestrina.
Another person also died during the flooding on the lagoon island, although in his case it may have been natural causes.
There is massive damage.
Brugnaro estimated that the cost ran into several hundred million euros.
Three barges sank, while gondolas and other boats were stripped from their moorings.
A fire broke our at the Ca' Pesaro museum because of an electrical malfunction.
Brugnaro said the council was asking central government to declare the city to be in a state of emergency and told local people and businesses to collect photographic and video evidence of the damage suffered for compensation claims. "We are faced with total, apocalyptic devastation," Veneto Governor Luca Zaia told Mediaset television.
"I'm not exaggerating; 80% of the city is under water, the damage is unimaginable". Premier Giuseppe Conte is due to arrive in the city to assess the situation on Wednesday and Zaia said he would stay the night. Infrastructure Paola De Micheli is heading to Venice too.
President Sergio Mattarella called Brugnaro and Raffaello De Ruggieri, the mayor 2019 European Culture Capital Matera, which was badly hit by flooding on Tuesday.
Venice's La Fenice has been temporarily put out of action too.
Although the theatre itself is not flooded, water has entered an auxiliary area affecting the electrical and fire-prevention systems.
Pierpaolo Campostrini, a member of St. Mark's management board, said things could have been even worse for the cathedral.
"We came within a whisker of the apocalypse," he said.
"The water got into the basilica, it flooded the floor, broke windows and entered the crypt.
"It is dangerous, not so much because of what is contained in there, but because the water could have caused problems for the columns that hold up the basilica". The devastation has led to controversy about the fact that the MOSE flood barrier system, which has been hit by delays and a corruption scandal, is still not operative. Environment Minister Sergio Costa linked the situation to the climate crisis.
The acqua alta came down to around 144cm on Wednesday after Tuesday's peak.