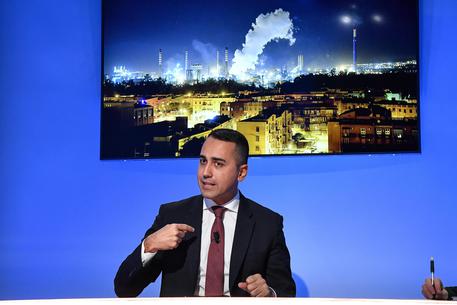 (ANSA) - Rome, November 8 - Foreign Minister Luigi Di Maio told an ANSA Forum on Friday that the issue of the former ILVA steelworks at Taranto is back in the news because "ArcelorMittal is going back on the agreement" to take over the facility.
"The old consortium (to take over ILVA) no longer exists. We must oblige ArcelorMittal to stay in Taranto," the 5-Star Movement (M5S) leader added. Di Maio, who was industry minister in Premier Giuseppe Conte's first government, said the administration was open for talks, but will not be bullied into accepting big job cuts at the long troubled plant.
"Dialogue is fine, but without threats," he said.
"ArcelorMittal knew they would face a government that demanded the pacts be respected.
"Asking to leave Taranto is an unacceptable act that is not the basis for dialogue.
"Putting 5,000 people out of work seems absurd to me".
Di Maio also took a swipe at the M5S's former coalition partners in the League, who pulled the plug on Conte's first government in August and have been highly critical of the new executive over the Taranto case.
"Every time I tried to be tough (when I was industry minister), the League sided with ArcelorMittal," he said.
"Now I know why. They invested in ArcelorMittal and they are battling for the multinational, not the workers.
"We have unmasked their fake nationalism". The government is desperately trying to stop ArcelorMittal pulling out of an agreement to take over the troubled former ILVA steel plant in Taranto, a move which could wreck the Italian steel industry and make thousands of workers redundant.
Premier Giuseppe Conte travelled to Taranto for talks with unions, officials and residents on Friday.
Conte told a scrum of workers and citizens at his arrival at the former ILVA steelworks that "I'll talk to everyone, but calmly".
Conte was challenged by some citizens who said they want the plant closed after the spate of cancer cases.
"You must know the situation," said one citizen.
The premier replied: "That's why I'm here." Another woman said "there are more deaths than births here." Another man said "this city needs something else, why are you still insisting on this factory?" The crowd of environmentalists, workers and residents of the cancer-hit Tamburi district told Conte repeatedly they wanted the plant closed.
Asked if they wanted it converted, they insisted it must be closed.
"Closure, closure, Free Taranto, Free Taranto" the activists shouted, prompting Conte to say "you have to let me speak". Conte said "we are working hard for clean energy".
The premier is now set to talk to workers who want their jobs saved.
Conte asked one man what he felt about ArcelorMittal and the man replied "Mittal hasn't behaved very well at all".
Conte told the crowd: "I don't have the solution in my pocket. We'll see over the coming days".
Confindustria industrail employers' group chief Vincenzo Boccia said on a possible new Italian consortium for the former ILVA steel group that "the problem is the precedent we are creating. We are showing the whole world that when an investor arrives certain rules change and we make them flee. Just imagine, then, who will come and invest in Italy. The problem is not replacing one investor with another but creating a credibility of the country with respect to the rules of the game". The case has rocked the government, which met officials from the Franco-Indian group, the world's biggest steel producer, on Wednesday. ArcelorMittal linked its decision to pull out to the lifting of a so-called "penal shield" protecting the group running the Taranto plant from criminal prosecution. Pollution from the Taranto factory, which employs over 10,000 people, has been linked to high cancer rates in the area and it is being cleaned up and turned around with government help.
ArcelorMittal reiterated in a statement Wednesday that the penal shield for managers was "essential" for the takeover operation. Industry Minister Stefano Patuanelli has accused ArcelorMittal of trying to "fool" the Italian State and said the penal shield was just an alibi for wanting to pull out for other reasons. Even if it stays on, the Franco-Indian steelmaker reportedly wants to cut 5,000 jobs across the former ILVA group, which includes other smaller plants in Genoa and Novi Ligure.
Moody's said Friday that it had changed ArcelorMittal's outlook from negative from stable and could downgrade its credit rating.
"An inability to execute the proposed withdrawal and termination of the agreement for the lease and subsequent purchase of Ilva S.p.A. (announced on 4 November 2019) in a frictionless and timely manner would add additional downgrade pressure," the agency said.