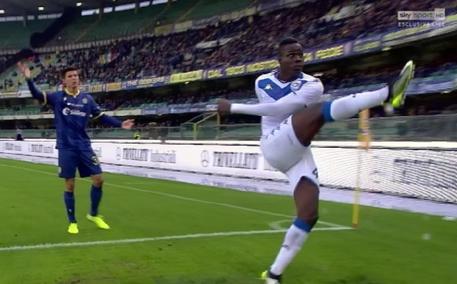 (ANSA) - Venice, November 4 - One of the leaders of Hellas Verona's hardcore 'ultra' fans said Monday that Mario Balotelli is not fully Italian when asked about the Brescia striker's protest against racist chants during his side's 2-1 defeat in Verona on Sunday.
Balotelli, who was born in Italy to Ghanaian migrants and has 36 caps for the national team, threatened to leave the field because of the chanting and hoofed the ball into the stands at one point to vent his anger.
The 29-year-old striker, whose former clubs include Inter, Manchester City, Milan and Liverpool, has frequently been the victim of racist abuse during his career. "Balotelli is Italian because he has Italian citizenship but he will never be able to be totally Italian," Hellas ultra chief Luca Castellini told Radio Cafè. When asked if Verona fans were racist, Castellini replied: "we have a negro in our team and he scored yesterday and all of Verona applauded". Castellini was referring to 18-year-old forward Eddie Salcedo.