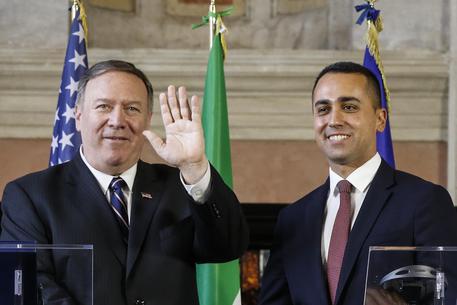 (ANSA) - Rome, October 2 - Foreign Minister Luigi Di Maio told US Secretary of State Mike Pompeo in Rome Wednesday that "the issue of tariffs concerns us, it is very concerning, we have firms that live off exports. Our companies must be able to have certainties and among them there is the trade relationship with the USA".

The Milan stock exchange's FTSE Mib index shed 2.87% on Wednesday after the World Trade Organization ruled that the United States can impose 7.5 billion dollars of tariffs on European goods in compensation for aid granted to Airbus.
Di Maio told a press conference after the talks with Pompeo that Italy would defend its firms from tariffs "with all our might".
He said "at a time when the economy is slowing down, our businesses must have certainties and we won't make exceptions in defending Italian firms with all our might".

Among those certainties, he said, was the "fundamental rapport with the United States".

Di Maio told the press conference that "we are allies of the US and we share the concerns on certain strategic infrastructure like 5G.
"We have no intention of taking part in trade accords that might harm our sovereignty as a State." He added: "the new norms (on golden power) in Italy make us among the most advanced in Europe on security".
Pompeo told Di Maio that "Italy is a sovereign country" but reiterated that in Italy, too, "China has a predatory approach in trade and investment" and thus represents a "mutual threat" to the two countries.
Pompeo also thanked Italy for its "effective leadership in Libya and North Africa".
Pompeo added that "we must be united against Iran's aggression" and "I want to thank Rome for the sanctions against Russia, until the situation changes".
The US role in Libya to spur all sides to a ceasefire will be "important", Di Maio told visiting Pompeo.
Pompeo said the US was working with Italy to take the political process forward.