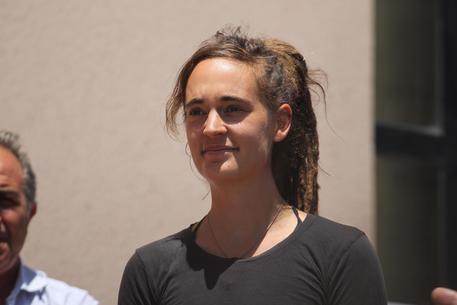 (ANSA) - Rome, September 3 - Former interior minister and anti-migrant League party leader Matteo Salvini was placed under investigation Thursday on suspicion of defaming Carla Rackete, the German skipper of the migrant rescue NGO ship Sea-Watch3.
The probe follows a complaint filed by Rackete in July.
Salvini reacted to the news by saying "reported by a German Communist, ferry woman of migrants, who rammed a finance guard motor boat: for me this is a medal! "I'll never give up, never".
Rackete filed her suit July 12 to close Salvini's Facebook and Twitter accounts because they allegedly stoked hate against her and the Sicilian prosecutor who released her after she defied the minister's closed-ports policy, Alessandra Vella.
In the suit, which attached rape threats against her from social media haters who allegedly responded to Salvini's criticism, the 31-year-old German migrant rescue ship captain argued that far-right League leader Salvini, who called her "a rich Communist scamp who shops in Portofino", spreads hatred and instigates people to commit crimes.
Salvini dismissed claims, notably from 5-Star Movement (M5S) former equal opportunities cabinet secretary Vincenzo Spadafora, that his comments on Rackete were sexist, saying he would have said the same things about a man.
He called on Spadafora to resign "if he can't stand being in government with dangerous male chauvinists and fascists".
The anti-establishment M5S was the League's partner in Italy's first all-populist government, on which Salvini pulled the plug on August 8 after 14 months in government.
Spadafora said he stood by what he said and refused to resign.
Salvini reacted to Rackete's announced suit Thursday by saying "the German Communist, the one who rammed the finance guard patrol boat, has asked prosecutors to close my Facebook and Twitter pages.
"There's no end to how ridiculous things can get. So can I use only Instagram now??" The city council of Paris on July 12 said Rackete and fellow Sea-Watch3 captain Pia Klemp will receive its top prize, the Grand Vermeil Medal, for saving migrants at sea.
The council said the award symbolised "solidarity for the respect of human lives".
It said the two charity operators were "still being prosecuted by Italian justice".
Rackete is under investigation for aiding and abetting illegal immigration.
Salvini said "it's not a joke. This is someone who crushed a police boat and now those guilty are the police? Just wait and see if some magistrate isn't going to probe the police now? Ramming police boats gets you prizes." "The Paris city council obviously has nothing better to do than to honor these individuals".