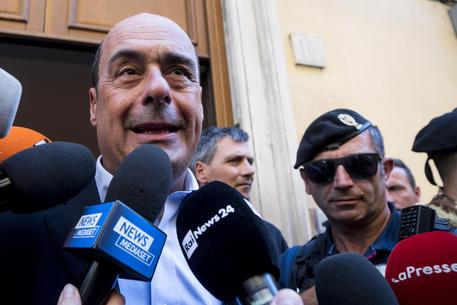 (ANSA) - Rome, August 21 - Centre-left Democratic Party (PD) chief Nicola Zingaretti on Wednesday called for a government fit to last the remaining three years of the legislative term, saying that if that were not possible, a general election was better. Speaking ahead of government consultations with President Sergio Mattarella Thursday, Zingaretti said after a PD summit: "a possible new government must be a turning point, lasting the term, or it is better to go to the polls".
Mattarella is set to consult all parties on the way forward after Premier Giuseppe Conte resigned after nationalist League leader Matteo Salvini puled the plug on a 14-month alliance with the anti-establishment 5-Star Movement (M5S).
He will talk to the PD and the M5S separately on Thursday and if they both come out in favour of a long-term government he may give the green light to a premier-designate to explore that possibility.
Zingaretti laid down five points to discuss with the M5S: "loyal membership of the European Union; full recognition of representative democracy, starting from the central role of parliament; development based on environmental sustainability, a change in the management of migrant flows, with Europe as a full protagonist; and a turning point on economic and social recipes, in a redistributive line, which will open a season of investments." It is uncertain whether the M5S will accept these terms.
The PD directorate gave Zingaretti a mandate to open talks to verify the possibility of "a turning-point government for the legislative term", marking "discontinuity" with the M5S-League government.
The motion granting the mandate was approved unanimously.
Zingaretti said "I have never demonised the M5S, but we must recognise that there are profound differences with them".
The PD leader said he could rule out any "under the table stitch-ups" or "shady deals" to cobble together a short-term government.
He also said the PD was "united" and would go to see Mattarella "all together" to verify the conditions for a "new turning point government, useful to the country".
Zingaretti ruled out the idea of the PD backing a second government led by Conte. "Discontinuity means that obviously we don't want to and can't join a government that proposes a Conte #2, the continuation of a government that we fought," he said.
"Everyone should get behind the need to start a new government".
Zingaretti added: "with respect to a government that went into crisis, we must give life to a new government that is a new team, but united on the programme".
Asked if he might be premier of this possible new government with the M5S, he said he already had two "weighty" jobs to do, as PD leader and Lazio governor.
The M5S, for its part, said Wednesday it was the top party in parliament, with the most seats gained in the 2018 general election, and would speak about possible ways forward towards either a new government or a general election after President Mattarella concludes his consultations with political parties Thursday evening.
"Following the crisis opened by Matteo Salvini," the M5S said in a statement, "the M5S deems it opportune in this highly delicate phase to await the outcome of the consultations which head of State Sergio Mattarella will lead.
"In these hours we are receiving appeals from many sides and the M5S takes the opportunity to remind all political forces that it is the top party in parliament, with a relative majority.
"Tomorrow, at the end of the consultations, we will communicate our evaluations".
M5S leader Luigi Di Maio has so far not said if he is in favour of a PD tie-up, or against it.