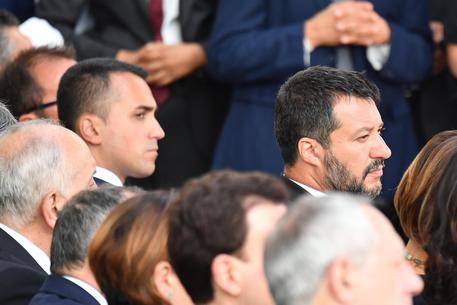 (ANSA) - Rome, August 16 - Anti-migrant Euroskeptic League leader Matteo Salvini is "sorry but the damage is done" after pulling the plug on Italy's first all-populist government over policy differences with the anti-establishment 5-Star Movement (M5S), M5S leader Luigi Di Maio said.
Citing persistent divisions over a high-speed rail link with France, Salvini's League filed a no confidence motion in Premier Giuseppe Conte on August 9, effectively ending the 14-month alliance with the M5S.
Di Maio reiterated that Salvini had done so because the League was riding high in the opinion polls with 38%, compared to 17% in the March 2018 general election, whereas the M5S's support has slipped from 33% to 16%.
Di Maio said the M5S, the biggest parliamentary group, would vote against the no confidence motion in Conte on August 20, spelling its probable failure since the second-biggest group, the centre-left opposition Democratic Party (PD), is also expected to vote against it.
That would leave President Sergio Mattarella, the arbiter of the government crisis, in a quandary.
He may try to appoint a PD-M5S caretaker government if those parties can iron out their own apparently irreconcilable policy differences.
PD House Whip Graziano Delrio said Friday a German-style government contract was needed if the two parties were to team up in government.