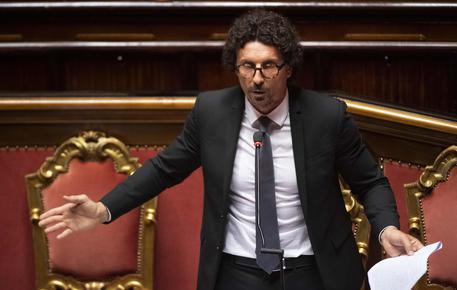 (ANSA) - Bibbiano, July 23 - Deputy Premier, Interior Minister and League leader Matteo Salvini on Tuesday urged 5-Star Movement (M5S) Transport Minister Danilo Toninelli to "unblock" the highspeed rail (TAV) line from Turin to Lyon.
The League is in favour of completing the project but the M5S is against it.
It has been reported that Premier Giuseppe Conte, who hitherto has been closer to the M5S, is veering towards giving the TAV a thumbs up.
Salvini said "it seems to me clear and evident that the TAV will be (completed).
"It's a fundamental project but it is not the only one that a minister has blocked, and either the minister of blocks unblocks it or I don't understand what he's doing in government," Salvini said.
Salvini has denied reports that he wants Toninelli removed in a reshuffle.
The government commissioned a cost/benefit analysis, which the M5S has seized on but which the League dismisses, showing Italy will lose some seven-eight billion euros with the TAV.