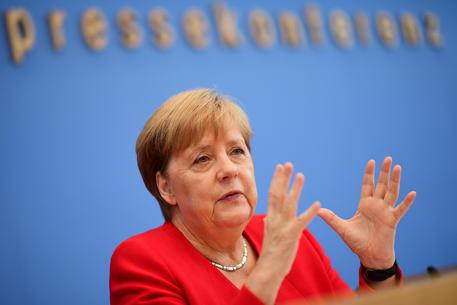 (ANSA) - Berlin, July 19 - Italy should clear up whether the nationalist League party sought or received funding from Russia, German Chancellor Angela Merkel said Friday.
"Clarification is up to Italy," she said.
"I think that the Italian parliament or others will ask for clarification on the affair".
Premier Giuseppe Conte has said he is willing to report to the Senate on July 24 over suspicions a person close to the League party discussed taking funding via oil kickbacks from Russia. Deputy Premier, Interior Minister and League leader Matteo Salvini has refused to report to parliament specifically about this case, saying he is willing to talk about everything during his regular question-time session. Salvini said his party has not taken a rouble off the Russians and described the case as "ridiculous". On Wednesday Salvini reiterated that he would not make time for a session specifically on the affair.
"I don't report on fantasy," he said.
However, he has since said he may discuss the case with parliament before Conte does. Milan prosecutors opened a probe after reports that Lombardy-Russia Association President Paolo Savoini met with two other Italians, lawyers Gianluca Meranda and Francesco Vannucci, and three Russians in a Moscow hotel to discuss siphoning off an alleged 65 million euros from oil profits. The minister has denied inviting Savoini to take part in two bilateral meetings with Russian President Vladimir Putin recently.
Police placed Meranda and Vannucci under investigation Wednesday and searched their homes.