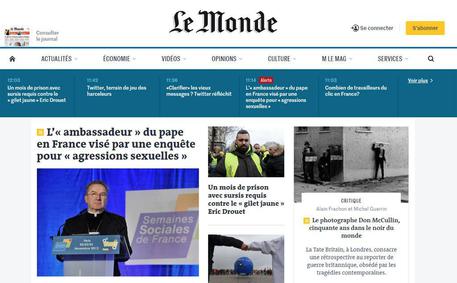 (ANSA) - Paris, July 8 - The Vatican on Monday revoked the diplomatic immunity of papal nuncio to France mons. Luigi Ventura, who is under investigation for "sexual attacks," the French foreign ministry announced.
A Quai d'Orsay spokesman said the ministry had received confirmation that its request for his immunity to be lifted had been met.
On February 18 Le Monde reported that a second complaint of sexual assault has been filed against Ventura.
Another Paris city council clerk, 39-year-old Benjamin G, has reported Monsignor Ventura, the French daily said.
On February 15 Le Monde said Ventura had been placed under investigation by Paris prosecutors on suspicion of "sexual attacks" on a young functionary on the Paris council.
The "aggressions" are said to have taken place during a reception at the Hotel de Ville on January 17, the French daily said.
Originally from Lombardy, Ventura is 74 and has been the Vatican's envoy to Paris since 2009.
Interim director the of the Vatican press office Alessandro Gisotti told journalists: "The Holy See has learned from the press that an investigation has been launched by French authorities into Msgr Luigi Ventura, Apostolic Nuncio in Paris.
"The Holy See is awaiting the result of the investigations".