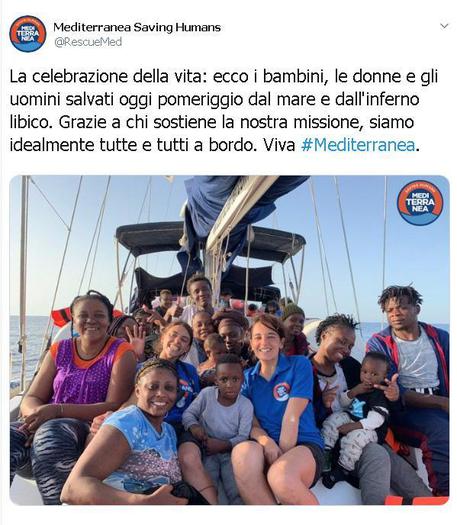 (ANSA) - Rome, July 5 - The Italian NGO Mediterranea's Alex migrant rescue ship carrying 54 migrants rescued off Libya Thursday has been stopped off Lampedusa according to a landing ban issued by Interior Minister Matteo Salvini, sources said Friday.
Salvini said the ship must go to Malta or else it "will be an act of violence".
Malta offered a port to the ship but the Mediterranea at first said this was "unfeasible".
It said because of the physical and psychological conditions of the migrants it was unable to go that far out of its way.
However, Alessandra Sciurba, spokesman of Mediterranea Saving Humans, later said it was ready to offload the migrants at Malta.
It was reported that a Maltese navy ship was heading for the Mediterranea to take the migrants, but the NGO said that "no ship is on the way, sadly".

The Italian navt later offered to take the Alex's migrants to Malta.
The Maltese government said Italy would take 55 migrants off its hands in exchange for the 54 migrants Malta would take from the Mediterranea.
Deputy Premier Luigi Di Maio said it was right that the ship should go to Malta.
He said NGOs that used sailboats like the Mediterranea were "reckless".

Meanwhile The 'Alan Kurdi' migrant rescue ship run by German NGO Sea-Eye rescued 65 migrants off
Libya.
It said it was now awaiting a response to landing requests from Malta, Rome and Tripoli.
A woman journalist was aboard the migrant dinghy.
Salvini said the Sea-Eye "can choose between Tunisia and Germany".
"Anyone who defends the borders and security of my country is welcome," he said.
He added that the Alex, with its 54 migrants, was going to Malta.