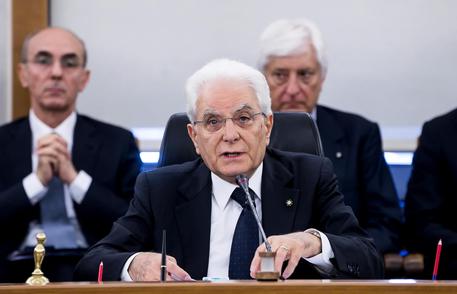 (ANSA) - Strasbourg, June 25 - The Council of Europe is following a case of judicial cronyism and alleged corruption that has embroiled the Italian judiciary's self-governing body, the Supreme Council of Magistrates (CSM), ANSA learned Tuesday.
The council's anti-corruption organ GRECO has asked Italian authorities for information on the latest developments in the case, sources said.
Italy's responses were discussed last week by GRECO, the sources said.
GRECO has decided, they said, "also in light of an evolving situation and the difficulty of expressing a judgment," to ask Rome for an update by the end of the year.
President Sergio Mattarella, the titular head of the CSM, told an extraordinary meeting of the CSM on Friday that he was alarmed by a Perugia probe into alleged cronyism in the Italian judiciary.
The meeting of CSM, the judiciary's self-governing body, was called to appoint two new members following the resignations of people implicated in the probe.
"Today the CSM turns a new leaf," said Mattarella, the nominal head of the council, as he chaired the meeting.
The president expressed "great concern" about the investigation into allegedly attempts to manipulate the appointments of prosecutors.
He said the probe "revealed an disconcerting, unacceptable picture" and had "produced seriously negative consequences for the prestige and authoritativeness of the whole judiciary".
He also called for the CSM to "react firmly to any form of degeneration".