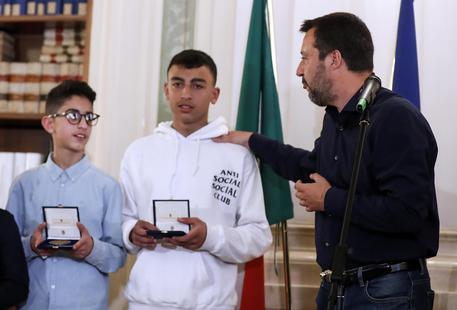 (ANSA) - Rome, June 11 - Two Egyptian boys who helped avert a massacre on a hijacked bus near Milan in March will receive Italian citizenship, sources said Tuesday. The citizenship proposal for Ramy Shehata and Adam El Hamami was approved by cabinet on Tuesday evening.
Adam's mother said the citizenship would be "a value for the future".
Meanwhile a video emerged Tuesday of Senegalese hijacker Ousseynou Sy saying "long live panAfricanism, we're fighting the corrupt governments and we're criticising European policy that exploits Africa".
Prosecutors said they would not publish the video for fear of encouraging copycats.
Seventeen of the 50 hijacked children suffered post traumatic stress disorder, doctors said Tuesday.
Interior Minister Matteo Salvini recently met Sherata and El Hamami at the interior ministry in Rome.
Salvini, who has changed his mind and decided to award them Italian citizenship, also met with the 49 other children from Crema and the Carabinieri who rescued them thanks to the pair's phone calls.
He then took the group for a stroll and an ice cream.
Egyptian Sherata, 13, will be granted his wish for Italian citizenship after hiding his phone from the Senagalese-Italian schoolbus hijacker and calling in police to rescue the 51 kids before the man torched the vehicle outside Milan.
Tunisian El Hamami, 12, who called the police after Sherata, is also set for citizenship for special merits.
Salvini drew flak after initially turning Sherata's wish down, saying he should be elected if he wanted to change Italy's law allowing foreigners born in Italy to apply for citizenship only after they turn 18.
The case prompted Italy's centre-left opposition to again call for a ius soli (law of the soil) law granting citizenship to kids much earlier.
Salvini rejected all talk of a ius soli law, which narrowly failed to get through the last centre-left-led parliament.
Receiving the group, Salvini said "I have had the disgusting sensation that the Crema kids were used by some people to wage a political battle".