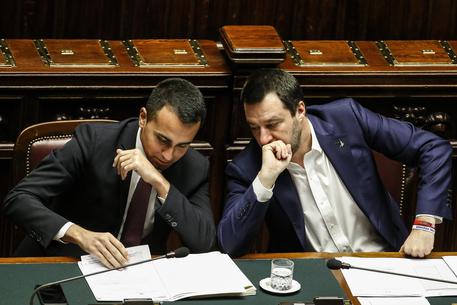 (ANSA) - Rome, June 6 - The government must go on, ruling partners Luigi Di Maio and Matteo Salvini said after an hour-long meeting Thursday according to a joint statement from their 5-Star Movement (M5S) and League parties.
The two leaders want to "restart" constructive dialogue with Europe, the note said, "putting Italians back at the centre after years of passive governments".
Objectives include cutting taxes, a "priority to relaunch the country", the joint statement said, adding that "extraordinary measures are needed, and no tax rise, for the development of the economy.
"Higher revenues from IRPEF (personal income tax) and VAT, almost 8%, and the reduction of unemployment with respect to 2018 in the first four months of the year tell us we are on the right path".
Deputy Premiers Di Maio and Salvini met at the premier's office in Rome.
Neither leader made any statements after the hour-long meeting.
Sources for Di Maio's M5S said the meeting had been "positive and fruitful".
It was the first meeting between the government partners after weeks of tensions spanning the May 26 European elections.
In the elections, Salvini's League doubled its vote compared to the March 2018 general election, from 18% to 34%.
The M5S, by contrast, halved its vote from 33% to 17%.