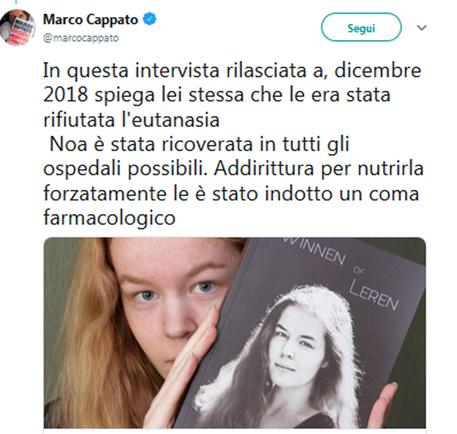 (ANSA) - Vatican City, June 5 - The Vatican on Wednesday lamented the death of Noa Pothoven, a 17-year-old girl from the Netherlands who reportedly ended her life via legal euthanasia on Sunday - although it was subsequently clarified she had not received government permission to end her life.
"Noa's death is a great loss for any civil society and for humanity," the Pontifical Academy for Life posted on its Twitter account, @PontAcadLife. "We must always assert the positive reasons for life.
#NoaPothoven".
The girl struggled with mental illness after being raped as a child and, in accordance with Dutch law, was reportedly granted permission to die with the help of an end-of-life clinic.
She had written a book about her battle with mental illness after being sexually abused. Dutch sources said Wednesday Pothoven had not been euthanised but had died after refusing food and drink.
"This is not a case of euthanasia," they said.
Italian right-to-die campaigner Marco Cappato said she had not received government permission to kill herself.