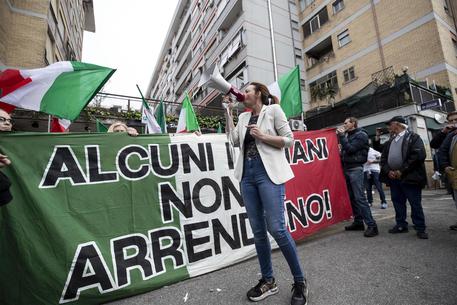 (ANSA) - Rome, May 10 - Rome prosecutors have opened a probe into the incitement to commit crime for reasons of racial discrimination in relation to protests in recent days against a Roma family being assigned a council flat in the Casal Bruciato district of the city.
The family have been subjected to threats and intense intimidation during protests by local people and militants from the rightwing CasaPound group. A woman living in the flat was told she should be "raped" and all Roma should be "hanged" earlier this week.
Rome Mayor Virginia Raggi had to be escorted away by police and was the target of a flurry of sexist insults after visiting the flat on Wednesday to show support.
Pope Francis, meanwhile, met the family at the centre of the row on Thursday.
Several people have been reported to prosecutors in relation to verbal abuse and threats the family were subjected to, sources said. Among the people to have been cited is a man who allegedly shouted "I'll rape you" at the woman who was trying to get to the flat with her young child. The man was said to be a CasaPound sympathiser.