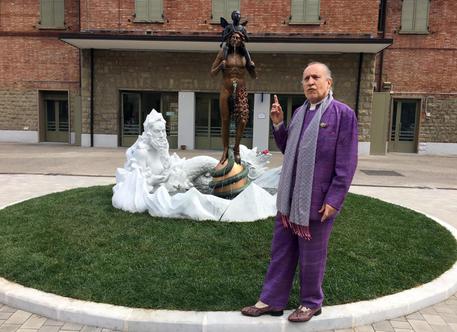 (ANSA) - Bologna, May 9 - A fountain featuring a horned faun with an erect penis was daubed with dung by conservative protesters near Bologna overnight.
The fountain has caused a row in the mountains near Bologna with detractors calling it Satanic and admirers saying it is a prime example of public art.
The work, sculpted by artist Luigi Ontani at Vergato, has been slammed by conservative League Senator Luigi Pillon among others.
Pillon, on his Facebook page, said it was "an imposing statue of a devil with huge horns and a glaringly erect penis, carrying on his back a boy with butterfly wings" and said it should be "buried in a stream of cement".
Mayor Massimo Gnudi, of the centre-left Democratic Party, explained that the faun represents the river Reno, carrying on its back the Vergatello stream, while a triton at the base is the Apennines.
"It's a work that recounts the local territory, in the artist's typical style," he said.