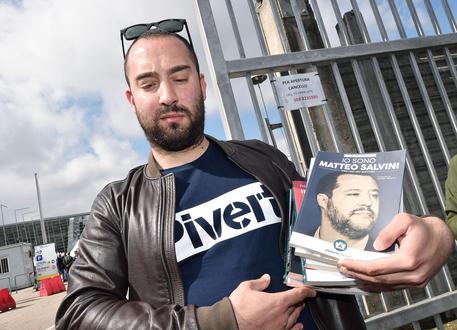 (ANSA) - Pesaro, May 9 - Deputy Premier and Interior Minister Matteo Salvini said the Turin book fair's decision to exclude Altaforte, a rightwing publishing house linked to Neofascist party CasaPound, amounted to censorship. "We are in 2019 and we have the censorship of books on the basis of ideas, the burning of books, which never did any good in the past," Salvini, who recently published a book of interviews with Altaforte, told a rally in Pesaro.
"He went on to criticise "the left-wing minority that claims the right to decide who can make music, who can stage theatre shows, who can publish books.
"You should respond to ideas with other ideas, not censorship". The Altaforte stand at the Turin book fair was completely dismantled on Thursday. Altaforte founder Francesco Polacchi has said earlier on Thursday that he intended to defy the ban. "If freedom of liberty are dear to you, I'll be waiting to greet you," Polacchi said on Facebook. He added that he would present Salvini's book on Saturday.
The fair excluded Altaforte after the city council and the Piedmont regional government, which are both stakeholders, requested that the contract for its participation be terminated.
Prosecutors opened a criminal probe for apology of fascism after the city and the regional government filed a complaint against Polacchi on Tuesday.
Piedmont Governor Sergio Chiamparino said there had been "no censorship or book burning as evoked by Matteo Salvini".
"Perhaps the interior minister would have preferred to side with the fascist publisher of his interviews and would have left out the Auschwitz victim.
"But the interior minister of a serious government should above all apply the Scelba and Mancino laws that enact the Constitution (against Fascism)".