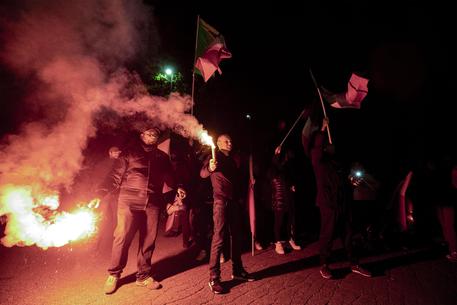 (ANSA) - Rome, April 4 - A Rome protest that led to the re-routing of Roma people shows that "we must look to communities to avert a war between the poor," the secretary-general of the Italian Bishops Conference (CEI), Msgr Stefano Russo, said Thursday.
"We should focus on the local environment as a whole, we are talking about people, after all," said Russo after the protests against the arrival of some 60 Roma in the outlying Torre Maura district.
He added: "we are concerned about the political exploitation of some situations".
Rome prosecutors have opened an investigation into the violent protests that took place in Torre Maura on Tuesday against the transfer of a group of around 60 Roma people to a reception centre there.
The probe is into the crimes of criminal damage and threats, with racial hatred an aggravating factor. Around 200 local people, supported by militants of the far-right CasaPound party, took to the streets in the protest, which saw trash canisters turned over and set alight. The city council said that 60-odd people would be moved to other facilities in the Rome area.
Rome Mayor Virginia Raggi defended the decision after she came under fire for allegedly capitulating to thuggery.